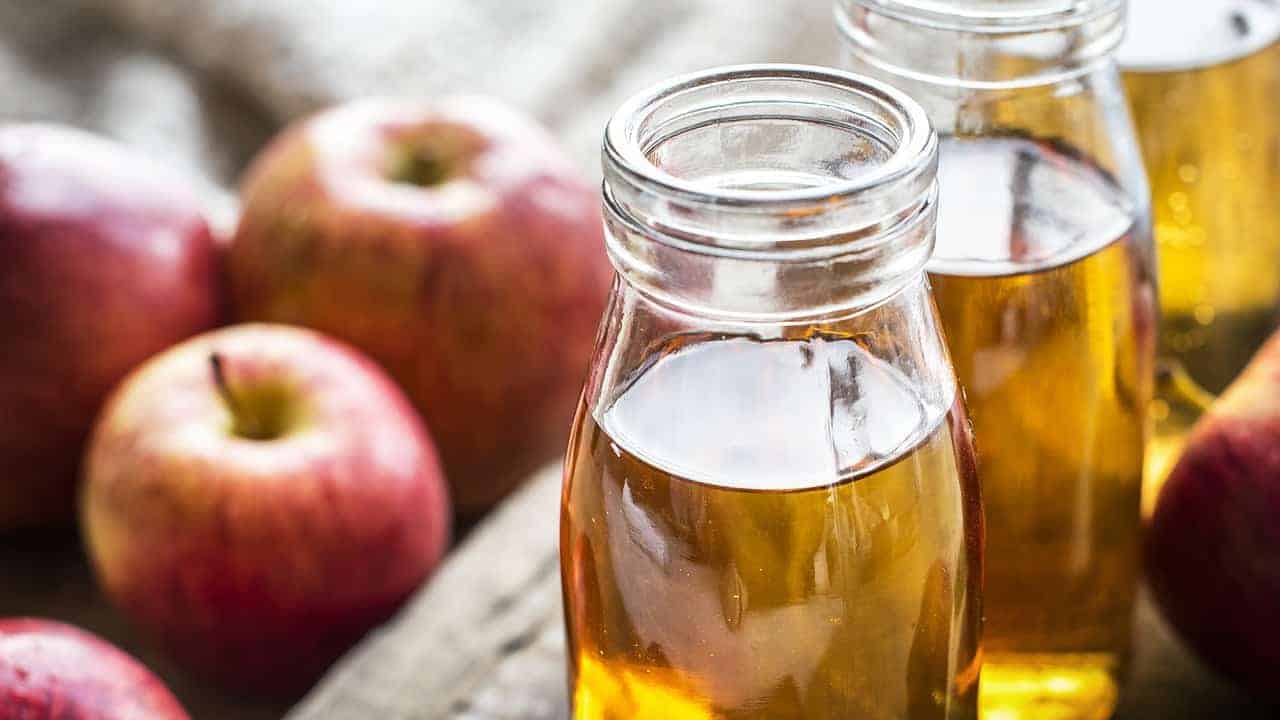 Apple cider vinegar is a solution obtained by fermenting apple juice. Although it has many features in common with the well-known spirit vinegar, it is more friendly for the organism. Recently it has become extremely popular among people who want to get rid of excess weight. Is apple cider vinegar really helpful for weight loss and how should it be used?

What is apple cider vinegar?

This amber colored drink is made by combining juice, cider or crushed apples with yeast, which causes a fermentation process and creates alcohol. Then, bacteria are added to convert the alcohol into acetic acid, the main active ingredient. The final product contains friendly bacteria, enzymes and amino acids. Among them particularly important are polyphenols, which have a strong antioxidant effect, pectin, vitamins A, B, C, E and minerals such as magnesium, potassium, calcium, copper, phosphorus.

Apple cider vinegar is low-calorie, one spoonful is about 3 kcal, moreover, unlike spirit vinegar it has slightly alkaline reaction, so it does not acidify the body but has a positive effect on its acid-base balance.

As far as health properties are concerned, the influence of apple cider vinegar on lowering the level of blood sugar, cholesterol and triglycerides is emphasized, what directly translates into lowering the risk of cardiovascular diseases, including such life-threatening ones, as stroke or heart attack.

Some scientists are convinced that apple cider vinegar also lowers blood pressure, but so far this has only been confirmed by animal studies. Unconfirmed, although highly probable, is also an anti-cancer effect, if only because of the presence of strong polyphenols inhibiting the development of free radicals.

Apple cider vinegar has bactericidal properties, that is why it is often used for disinfection, it is also helpful in treating mycosis and various skin infections, inflammation of throat, joints and sinuses, ear infections. It is also used to relieve muscle and joint pain. Vinegar compresses bring significant relief to joint pain, sinus, throat and ear infections.

In addition, apple cider vinegar cleanses the body of toxins, which also has an impact on the process of losing weight. Additionally, it stimulates the production of digestive enzymes, as a result of which the metabolism is accelerated. Pectin, which supports the digestive process and lowers the cholesterol level, as well as other components of apple cider vinegar contribute to alleviation of digestive problems, normalization of sugar levels, detoxification of the body and faster metabolism.

How to drink apple cider vinegar to lose weight?

This remedy is basically safe and has no side effects with normal use. If you are conducting a weight loss treatment, you need to make a water solution (a tablespoon of vinegar per glass of water) and drink it half an hour before the main meals – breakfast, lunch, dinner.

Under no circumstances should you exaggerate either the concentration or the amount of the solution. Otherwise we can irritate the gastric mucosa and lead to stomach ulcers or decalcification of bones!

How to make apple cider vinegar in your own kitchen? It’s very simple. Here is a proven recipe:

Peel the apples, grate them or put them in a juicer. Put the pulp into a wide bowl, add water, 10 dkg sugar, yeast and a piece of wholemeal bread. Cover with gauze and leave for 10 days.

Stir the mixture several times a day with a wooden spoon. After 10 days, filter the solution through the gauze, add another 10 dkg of sugar to the clear liquid and leave it for a month and a half. After this time, strain and pour into bottles. Store the vinegar in a dark and cool place.

As usual in relation to various weight loss aids, opinions are divided. Some users praise the effectiveness of apple cider vinegar, others claim that it did not help them at all. Moreover, there is no unity among supporters either. Some say that liquid vinegar, especially homemade vinegar is the best, some prefer apple cider vinegar in tablets.

Without taking sides, we should reach for the old but not very popular truth that none of the specifics will be sufficiently effective if the slimming treatment is not treated comprehensively, that is, we do not combine supplementation with a healthy slimming diet and physical activity.