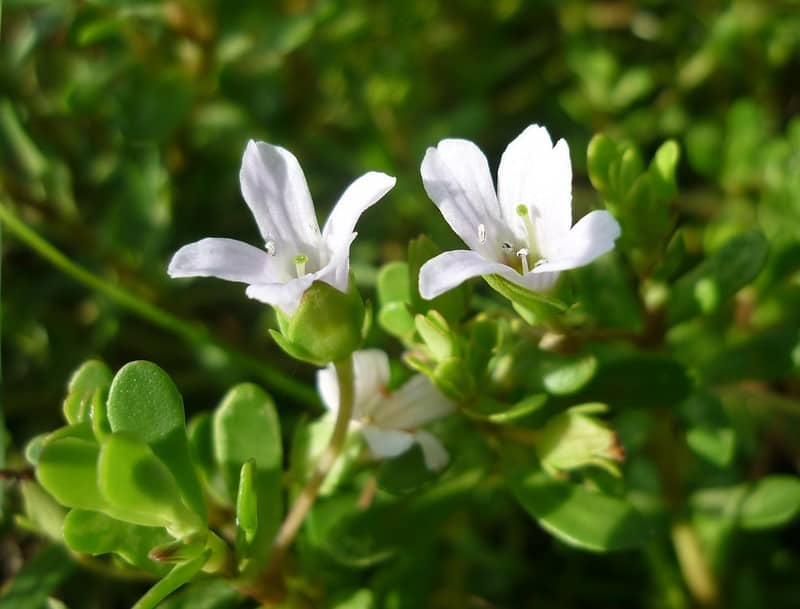 Bacopa monnieri, or small-leaved bacopa, also known by its ethereal name brahmi, is one of the most valuable natural medicines used in ancient Indian medicine – Ayurveda. The healthful properties of this plant are undeniable and are due to the presence in its composition of a rich spectrum of active substances, including priceless bacosides and antioxidants. Bacopa is used in many diseases and ailments (e.g. insomnia, epilepsy, neurotic disorders, depression). It is also popular among people exposed to high intellectual or physical effort – in order to improve brain function and reduce susceptibility to psychophysical fatigue. You can read about the amazing properties of Bacopa monnieri in the article below.

It originated in India, where it has been used for medicinal purposes for several thousand years. In fact, it is one of the most important herbs in the famous Ayurveda – an ancient Indian medical system dating back over 5,000 years, containing a rich knowledge of the functioning of the human body, describing many effective methods of combating diseases, combining treatment with psychology and philosophy, and being a broad compendium of knowledge on medicinal plants and their invaluable influence on human health.

The second name of the Small-leaved Bacopa, brahmi, comes from one of the three most important gods of the Hindu religion, the god Brahma. It is not without reason that the plant was given this divine name – its properties proved to be so valuable and so helpful to man in fighting his health problems that it was necessary to crown it with the name of the highest being.

Brahmi (Bacopa monnieri) grows today on almost all continents. It belongs to the lepidoptera family, it likes humid substrates, therefore it usually inhabits the vicinity of water reservoirs, beaches, peat bogs, marshes and other wetlands. It is a low herb, growing to a maximum of several dozen cm. It is considered a climbing plant with numerous creeping or hanging bare stems up to 40 cm long.

Bacopa leaves are dark green, heart-shaped, small, dense and delicate. The leaf blade is either entire or toothed. The 5 petalled flowers of brahmi are single, small, petite and white, pinkish or bluish in colour.

In this seemingly common plant lies enormous health potential, which has been successfully exploited for hundreds of years. Brahmi has strong antioxidant properties, which is extremely important in the context of the unhealthy lifestyle so many of us lead and which contributes to premature aging of the body.

In addition to its antioxidant properties, brahmi has been shown to be anti-inflammatory, antipyretic, detoxifying, cell and tissue regenerative, cardioprotective, neuroprotective, adaptogenic and nootropic. Due to the multitude of positive actions of bacopa on the human body, the spectrum of its applications is very wide. Sometimes, in order to achieve more complex effects, bacopa is used in combination with other substances of similar action.

For the pro-health properties of Bacopa monnieri is responsible for the rich composition of the plant, in which the first place should be mentioned steroidal saponins called bacosides (bacosides A and bacosides B). These are substances with high biological activity, supporting the functioning of the body in many ways.

Other components of bacopa include flavonoids acting as antioxidants, phytosterols protecting the heart and circulatory system, as well as: proteins and amino acids, organic acids, including betulinic acid, alkaloids, terpenoids, tannins.

Brahmi is a rich source of irreplaceable for our health antioxidants (antioxidants). Their role is fulfilled in this plant, among others, by phenolic compounds and flavonoids. Thanks to antioxidants, we become more resistant to many diseases of civilization, including cancer, neurodegenerative diseases, cardiovascular diseases.

Antioxidants fight harmful free radicals, prevent oxidative stress of cells and damage to our genetic material. They counteract the multiplication of cancer cells, block the mechanism of destruction and premature death of healthy cells, stimulate the process of regeneration of the body. In this way, the antioxidants contained in bakopa not only reduce the risk of dangerous diseases, but also slow down the aging process, allowing you to maintain vitality and a youthful appearance for longer.

Bacopa supports our nervous system in a multifaceted way, which translates into improved cognitive functions, better brain function in many aspects and a better mood. It belongs to the group of nootropics, i.e. substances which improve communication between neurons and regulate the level of important neurotransmitters such as acetylcholine, GABA or serotonin.

It is worth noting that bacopa is one of the most highly valued and most effective herbs improving memory. The plant positively influences the limbic system and stimulates blood flow through the brain, which results in an improved ability to remember and recall.

Studies conducted on a group of middle-aged people have proven that long-term supplementation of bacopa (several weeks) results in a significant improvement of mental efficiency and memory. The herb also shows a positive influence on the speed of information processing and thought formulation, as well as the ability to focus attention and associate.

Another important aspect of the effect of bacopa on the brain is the protection of neurons against the process of degradation, premature death, as well as against neurotoxins and free radicals. The plant inhibits the aging process of the brain and, what’s more, it stimulates the regeneration of nerve cells, promoting the preservation of high mental performance until old age and reducing the risk of the occurrence of neurodegenerative diseases such as Alzheimer and Parkinson.

The most important effects of Bacopa monnieri when it comes to supporting the nervous system and improving mental fitness:

Other properties of bacopa

A valuable property of bacopa is fighting all harmful microorganisms that inhabit our body. This includes bacteria, fungi, protozoa and other parasites, as well as viruses. Apart from inhibiting the spread of microorganisms, brahmi reduces inflammation in the body and blocks the development of various types of infections. The analgesic effect of this herb is also said to be present. Moreover, the effect of taking brahmi for a long period of time is to generally strengthen and improve the immunity of the body.

It is also worth mentioning the excellent detoxifying properties of bacopa minor. It absorbs and facilitates the excretion of heavy metals and other poisons which get into our bodies as a result of contact with chemical substances or through polluted air, stimulants, food saturated with preservatives and other synthetic additives.

Abeneficial effect on the digestive system is another advantage of Bacopa monnieri. The plant fights stomach ulcers, relieves intestinal disorders, has a diastolic effect, increases the production of mucus, which has a protective function for the digestive system. What is more, bacopa improves the work of the liver and protects its cells from damage. It may also be helpful in normalizing elevated levels of liver enzymes.

Bacopa is very highly rated by people who had the opportunity to use it. The first positive results come after just a few doses. Then you can notice an improvement in mood, easier entry into a state of relaxation or sleep, reduced nervous tension, better brain function, increased motivation and willingness to act.

According to many opinions, with each week bacopa “reveals” more and more power. After several weeks of supplementation there is a clear improvement in memory and concentration, mental potential increases, we feel a permanent improvement in well-being, we become more resistant to physical and mental effort and much less susceptible to stress.

Many people commenting on the effects of bacopa also emphasize other benefits which appeared along with the use of this raw material, such as: effective support for the liver, efficient detox of the body, effective fight against pathogens (e.g. fungi, bacteria), improvement of immunity and many, many others.

Bacopa – what to combine with?

What is worth noting is that we do not have to take each of these substances separately. Some dietary supplements, such as Brain Actives, contain all four of these components plus several others that enhance their effects.