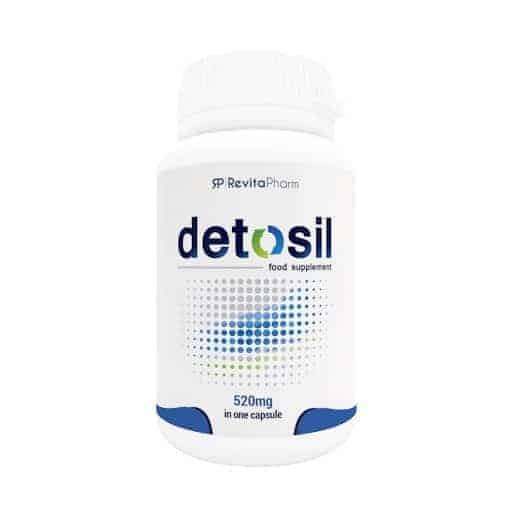 Based exclusively on natural ingredients, Detosil is a formula which comprehensively stimulates the process of removing toxic substances from the body, thus supporting the proper functioning of the immune system, liver, kidneys and other organs. At the same time, due to its strong antioxidant properties, it neutralises the negative effects of free radicals. The substances contained in the supplement also play a role in weight loss.

Detox, or cleansing the body

In the past this term was used mainly to refer to removing the effects of alcohol or drugs from the body and withdrawal of these substances by addicts. Currently, detoxification has gained popularity as a method of eliminating all toxins, understood as environmental pollutants and lingering by-products of metabolism. At the same time, body cleansing is treated as an important aid in the process of weight loss.

There are many ways of such detoxification. These may include fasting, various diets, such as juice or fruit and vegetable diets, herbs of diuretic or laxative nature, and finally treatments such as hydrocolonotherapy, consisting in flushing out deposits from the large intestine.

However, it seems that the most effective, because permanent and at the same time the healthiest method, is simply a proper diet, especially one rich in fiber. It has a beneficial effect on the functioning of the liver and kidneys, whose task is to remove remains and harmful substances. If to this we support ourselves with high quality supplements, we can expect positive results in a relatively short time.

Why is purification important?

Unfortunately, the increasingly popular healthy lifestyle is accompanied by circumstances that are clearly unfavourable for it, which we have no influence on. Environmental pollution, the widespread presence of harmful substances contained in food, smog, are all factors that have a huge impact on our health and well-being.

All the time toxic compounds are deposited in our body causing various symptoms, sometimes not associated with poisons at all. These include, among others:

In this way, very often the body itself sends signals indicating poisoning. What is more, permanent intoxication with toxins causes the basic mechanisms of organism functioning, including, first of all, the hormonal economy and the immune system, to become dysregulated. Only a thorough detoxification carried out from time to time can restore the disturbed balance, health and vitality.

Occasional cleansing of the body therefore seems necessary. Removing harmful metabolic residues and pollutants from the environment will bring measurable health benefits. It will regenerate and strengthen the body, oxygenate, hydrate and deacidify it, improve circulation, strengthen immunity, restore energy and well-being.

Preparation of the body

A cleansingdiet should be followed from time to time, in the form of either a one-day hunger strike or as a longer, several-day treatment. In both cases it is necessary to prepare the body for cleansing, i.e. at least a week in advance exclude from the menu all unhealthy food – highly processed food, sugars, fats. These kinds of products should be eliminated from our menu permanently, because they are not only harmful but also fattening.

Side effects of detoxification

We can not make sudden changes from day to day, hence the need for advance preparation. In this way, we will alleviate potential unpleasant effects in the form of, for example, fatigue, headaches, irritability or drowsiness, problems with bowel movements. Nevertheless, even if they occur, they soon pass, what is more, they prove the effectiveness of the therapy.

The important role of water

It is essential to consume large amounts of water (about 2 liters a day) during the treatment, possibly with the participation of herbal infusions. Water not only cleanses the body, but also hydrates and moisturizes it.

The food we eat should contain a large amount of dietary fiber, which supports peristalsis and cleanses the intestines so that harmful debris does not remain in the digestive system, regulates digestion and bowel movements, and is low in calories. Therefore, we should eat vegetables, such as all root vegetables (carrots, beets, radishes), different types of salads, broccoli, kohlrabi, zucchini, cucumbers, tomatoes, peppers, as well as legumes. Whole-grain cereals and fruit are also rich in dietary fibre. Of the latter, however, choose those with low sugar content.

Green tea also has a supporting role, as it regulates digestion and the entire process of metabolism, cleanses the body of toxins, accelerates fat burning, and additionally neutralizes free radicals.

One day or more?

One-day cleansing treatment, during which you eat only vegetables and drink water, naturally has a positive effect on the body, because it allows it to rest and regenerate and removes a large part of toxins, but more lasting beneficial results can be expected after several days of treatment.

It is not, of course, about a week-long starvation, which not only destroys the body but also slows down metabolism and results in the yoyo effect, but a sensible cleansing diet combined with supplementation with a detoxifying product.

Detosil – action. A supplement that helps your body get back to normal

Detosil is a specification whose task is, on the one hand, to cleanse the body of toxins and parasites, on the other hand, to support the work of internal organs. According to the manufacturers, Detosil not only effectively removes harmful substances (toxins, parasites and fungi), but also prevents the future accumulation of such undesirable elements. This is all the more important since, according to estimates, during the year in the human body can accumulate even several kilograms of toxins.

In addition, as assured by the manufacturers, Detosil strengthens immunity, restores the natural balance in the body, what’s more, neutralizes the action of free radicals. As a result, it leads to the withdrawal of troublesome symptoms resulting from poisoning, eliminating the feeling of fatigue and apathy, restoring well-being and proper functioning of the digestive system.

Therefore, if someone complains of frequent infections, allergies and skin problems, digestive disorders, exhaustion and weakness, lack of concentration, pain of unknown origin, it is highly probable that this is the result of organism intoxication and detoxification should be performed.

The supplement, based on natural ingredients, by eliminating harmful substances from the body and reducing inflammation, leads to a general improvement in health and well-being. It works on many levels – it supports the liver in cleansing the body of toxins, improving its functioning, influences the removal of harmful substances from the respiratory, digestive and urinary systems, from the skin, which is extremely sensitive to negative environmental and disease factors.

Additionally, the supplement strengthens the immune system, accelerates the regeneration of damaged cells, supports natural protective mechanisms contributing to the prevention of chronic diseases, restores health and vitality. Its influence on weight loss is not without significance. By cleansing the body and increasing the metabolic rate and energy level, it significantly supports effective weight loss.

Detosil – the composition of the supplement

The secret of the supplement’s effectiveness lies in its composition. Detosil contains carefully selected natural substances derived from plants known for their healing properties and cultivated in an ecological environment.

The liver, an extremely important organ, has outstanding regenerative abilities, but we must admit that we often treat it extremely brutally. Toxins in the environment and even in food, stimulants, and synthetic pharmaceuticals overload it beyond its regenerative capabilities. Thistle prevents damage to this organ, promotes its regeneration, protects the liver and kidney parenchyma against the harmful effects of various poisons, and accelerates their removal from the body.

Used for centuries as a liver remedy, it regenerates the liver and soothes inflammation. Thistle also has the ability to neutralize toxins and so-called free radicals, increases the secretion of digestive juices, has a soothing and anti-inflammatory effect.

This plant was already well known in ancient China and due to its valuable health promoting properties is now widely used in medicine and cosmetics. The biological activity of licorice root is due to its unique composition, primarily saponins, as well as flavonoids and coumarins.

Originating from the tropical forests of South America, the Acai b erry is worth recommending not only for its detoxifying effects but also for its exceptionally valuable nutritional value. They contain vitamins A, C, E and B, numerous minerals (magnesium, potassium, calcium, phosphorus, copper, zinc), amino acids and healthy fatty acids. That’s not all, we can find in them almost all major antioxidants inhibiting the development of cancer and delaying the aging process. In turn, the presence of polyphenols contributes to better circulation and reduction of too high cholesterol levels.

Blueberries Acai, apart from being a rich source of antioxidants and having important omega-3 acids, fibre and many vitamins, also have a cleansing effect, support the reconstruction of the intestinal flora, intensify metabolic processes.

Fashionable for some time in the Western world, and known and appreciated by Eastern medicine as early as 5 thousand years ago, green tea has many health promoting properties. Rich in polyphenols, flavonoids, amino acids, vitamins and minerals, it shows a number of properties promoting better and faster metabolism, and, consequently, more effective body detoxification and weight loss.

Green tea significantly aids digestion, contributes to better fat burning, removes harmful residues of metabolism, strengthens blood vessels. Due to the abundance of antioxidants, it contributes to the prevention of cancer. Moreover, studies have shown that regular drinking of green tea can have an impact on reducing the risk of dementia, Alzheimera disease and other neurodegenerative diseases.

The price of this supplement is not among the lowest, as the cost of a package containing 30 tablets, which is enough for a month’s treatment, is about € 32. This issue is often raised in their comments by Internet users.

Opinions about Detosil are divided. Some people praise this specification, others are of the opinion that it is not efficient and moderately effective for such a price. It is impossible to unequivocally confirm the effectiveness of the preparation. There are no measurable numbers such as lost kilograms and the statement about better mood is difficult to be treated as an objective measure of effectiveness. Nevertheless, the composition of the preparation gives a certain guarantee of benefit from its use.

Of course Detosil is not the only supplement available on the market that cleanses the body and ensures its proper functioning.

For example, it is worth paying attention to Spirulin Plus, a supplement that restores the acid-base balance, removes excess water and all harmful substances from the body, and supports the work of major organs and organs.

Spirulin Plus is characterized by its unique composition (it contains, among others, chlorella and spirulina, as well as nettle, green tea, dandelion extract, etc.), high effectiveness and great recognition from customers.

Apart from its detoxifying function, it also has an impact on speeding up metabolism and reducing appetite, as well as on improving mood and energy levels!

Find out more about Spirulin Plus