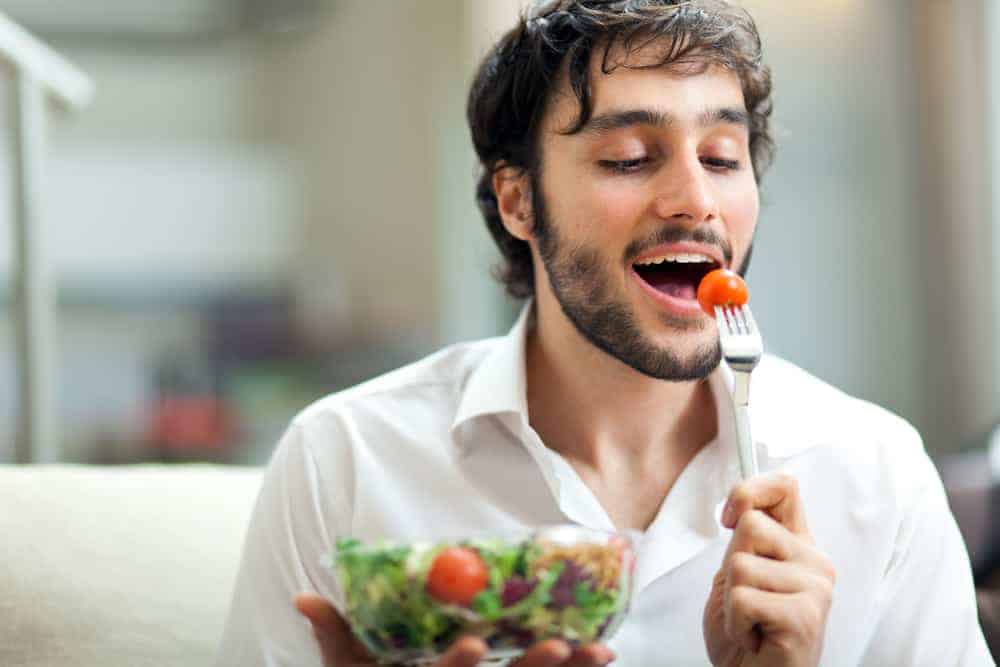 Diet for a man – how a real man should eat

The word diet and everything connected with it arouses at least mixed, and often even extreme, feelings among the male part of our society. A real, one hundred percent man, and after all, most people consider themselves to be such, does not usually bother about such things, even though his physique is sometimes decidedly different from the accepted ideal. There is no denying that many men, instead of presenting an impressively muscled, slim body, are presenting a bigger and bigger belly that spills out of their pants. However, every woman knows that forcing your husband, fiancé or partner to change their eating habits is extremely difficult, and forcing him to follow a healthy diet seems to be almost impossible. So it’s worth knowing what diet will be the most suitable and how a man should eat properly, who wants not only to be slim, but most of all to keep his strength, health and physical fitness to a very late age.

Looking at the way most men eat, it is safe to say that most often they eat just about anything and everything. Their diet is definitely dominated by everything that is unhealthy and high-calorie, and they even can’t do without meat, while avoiding eating vegetables and fruits. Mistakes made are quickly avenged, causing more and more overweight or obesity, combined of course with serious health problems. Too much body weight is the cause of many diseases, the mostserious of which are:

If you still can’t lose weight despite dieting, it’s a warning sign that an undetected disease is developing in your body, which is a symptom of it, such as hypothyroidism, causing obesity and requiring immediate treatment. This state of affairs is the fault of most men, leading a little active, stationary lifestyle, and unfortunately it is difficult for them to force themselves to any physical activity, preferring to spend time on the armchair or couch, and watch sports on television.

Diet for a man – where to start

Forcing yourself to lose weight is equally difficult, and the whole process requires a lot of patience and self-denial. The most important thing is to be aware of the risks described above, and if there are any worrying symptoms, consult a doctor. It may also be necessary to visit a professional dietician, who will be happy to help you compose a diet perfectly suited to your specific needs. He will develop not only a menu, but also a precise plan of all meals, varied so as to introduce some variety and avoid discouraging monotony. There are a few general principles that should be followed when starting your treatment, or if you want to act prophylactically, and they work in virtually every case.

1. the right number of meals and eating regularly

A typical male diet usually consists of a complete lack of breakfast, explained by lack of time, then a quick meal during the day, usually unhealthy fast food, pizza or a hamburger, and only in the evening complementing all deficiencies. In most cases, a hearty, indigestible and obligatory meat supper, that beloved cutlet dripping with fat, with which you would look in vain for vegetables. Eating this way at such a late hour causes that the body does not use the nutrients supplied to it, but what we eat, it deposits in the form of a growing layer of fat tissue. Regular food is the absolute basis of a healthy diet, without which there can be no question about the positive effects of the treatment. Doctors and nutritionists recommend 4 – 5 meals a day, necessarily with the same intervals between them, not longer than 3 – 4 hours.

There are many myths surrounding men’s diets, saying that men need to eat more dishes that provide large amounts of protein, which is necessary for the proper development of muscle tissue. Yes, there is a lot of truth in that, but the amount of nutrients provided should be adjusted to the specific body, so the meals must be properly balanced. This serves not only weight loss, but also maintaining full health, which of course does not mean that you have to eat only vegetables or fruit and give up meat. It all depends on what kind of meat we are going to eat and what part of a meal it is going to constitute, and if we are not able to resign from it completely, it is worth thinking about replacing e.g. pork with poultry or fish. Of course we will benefit most by eliminating them from our diet, and nutritionists recommend many other products that can provide us with the same amount of protein and these are:

3. the less sugar and salt we eat, the better

It would be hard to find a man who is not a glutton and who does not love sweets, cakes, candies and chocolate. However, eating them in large quantities has negative consequences and not only in the form of obesity, but most of all in the amount of sugar that our body receives in this way. So do not underestimate the popular saying that “sugar is the white death”, because its truthfulness will be confirmed by every doctor. Eating something sweet will give us a temporary feeling of satiety, but the calories delivered in this way can be safely called empty. So let’s limit sugar to the absolutely necessary minimum, and according to the recommendations of the World Health Organization its daily portion should not exceed 50 g. Let’s also get rid of carbonated, artificially sweetened drinks from our diet, the number of folds and belly belly bulge will decrease in no time, as will the risk of diabetes.

The same rules should also apply to the amount of salt consumed, which can be found in almost all food products, of which we are usually not even aware. While its presence in cured meat is obvious, its presence in sweets is at least surprising. The recommended daily dose of salt is only 5 g and we should rather not exceed this amount, unless we do not mind high blood pressure and other heart diseases that it can cause.

4. vegetables and fruit, a natural source of nutrients

While eating meat in any form doesn’t cause men the slightest problem, incorporating the right amounts of vegetables and fruits into your diet is akin to a real road through agony. It’s hard to explain to the average guy that these are the richest and one hundred percent natural source of everything the body needs to function properly, especially vitamins and minerals. The male body needs them in exceptionally large quantities, in many cases different than for women. Men who primarily want to reduce their weight need B vitamins to aid digestion and speed up carbohydrate and fat metabolism. Vitamin C, which supports the heart and circulatory system, and D, which protects the bones e.g. against osteoporosis, will also be useful.

That’s why vegetables and fruits should find a permanent place in men’s diet, not in a symbolic form, some green addition to a sandwich or a cutlet, but as a full meal or at least a large portion of salad for dinner. Vegetables and fruits, sliced carrots, apples or pears can also successfully replace all unhealthy snacks consumed in front of the TV, chips and sweets. Possible remaining deficiencies can be supplemented by carefully selected dietary supplements, with a natural, preferably plant-based composition, acting comprehensively, not only for weight loss, but also containing herbs that increase immunity.

A varied diet according to the level of physical activity

Diets are not the same, so when choosing the best diet for us, we need to take into account another important factor, our lifestyle. It directly determines the amount of nutrients supplied to the body, giving it energy for a particular form of activity or work. The daily requirements will be different for a person who works physically, whose meals should be more caloric, rich in components such as protein and high-energy fats. It is difficult in this type of diet to do without meat, but when it is on the plate, it is only in the above described company of healthy salads from fresh vegetables. Lack of vitamins will be supplemented by fruit, fresh or in the form of pressed juices, of course without added sugar, and a similar way of nutrition will also be good for men practicing sports.

On the other hand, those who have a typically sedentary mode of work, and therefore belong to the group most at risk of overweight or obesity, have a much smaller need for calories. Their diet must therefore be composed of products containing mainly carbohydrates, such as whole-grain dark bread, cereals and nuts. The most important meal of the day is breakfast, giving you energy for the day, especially necessary to perform mental work, improving concentration and activity and proper brain function.

Diet for men – how to properly compose a daily menu

When composing your daily menu, make sure that it is not too monotonous, but varied. This way we will avoid boredom with particular dishes, do not be afraid to experiment, and on the Internet you will certainly find plenty of interesting recipes, which, however, should be consulted with a dietician beforehand. In a typical daily menu, each meal should include: