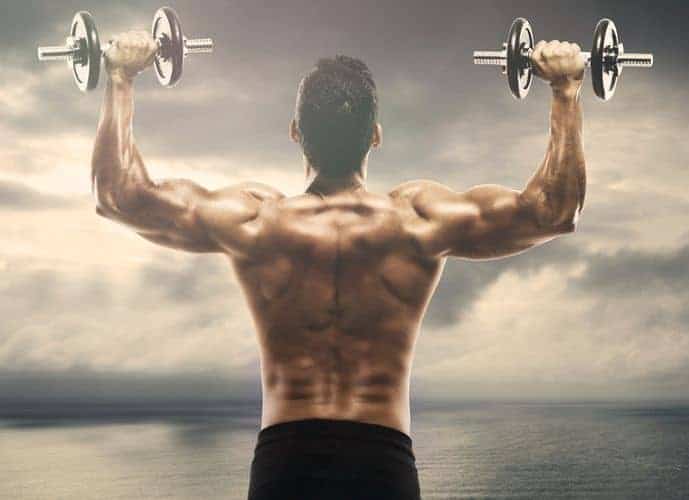 A proper diet, described in my previous post about dieting for men, should apply to every man, who wants to maintain full health and vitality until old age. Such a diet works perfectly in most cases, according to the principles of nutrition adopted for the lifestyle, stationary or active, but completely different rules will apply to men, who care not so much about losing weight or maintaining a constant weight, but rather about building muscle mass. There’s no denying that a well-built guy, with clearly visible muscles under the skin arouses admiration and envy not only of the opposite sex. Unfortunately it’s a long way to get there, and muscles need a proper foundation for proper growth, which means gaining weight, and of course we’re not talking about being overweight or obese. The body simply needs strength to withstand a strict training regime, which you will have to impose on yourself, which will be helped by providing it with the right amount and quality of nutrients along with food.

Diet for muscle mass – what it is and where to start

Deciding on practicing strength sports or just a gentle improvement of your muscles, although these two things usually go hand in hand, it is worth at the outset to clearly define what a diet for mass really is. Every athlete, not only bodybuilder, is obliged to have a special diet, which planning should be done by a nutritionist, preferably in consultation with a doctor and trainer, who on the basis of assumptions received will create an appropriate plan of exercise. However, most beginners in this sport think that it is enough to eat more, but the wrong choice of products included in the daily menu, often lacking the right amount of vitamins or minerals, gives the opposite effect. Yes, the body increases body weight, but the simultaneous increase in body fat is usually so large that it ends up in overweight or obesity, and it will take a very long time to burn off so many fat cells.

Defining the term mass diet in the clearest way, we can say that it is a diet designed to bring a carefully calculated positive caloric surplus, consisting only of the most nutritious foods. Absolutely forbidden in it is all kind of “junk” food, which we often stuff ourselves with every day, hamburgers, pizza, or so popular chips and other sweet snacks eaten in front of the TV. All this must immediately land in the trash bin replaced by the products presented below. Calorie surplus itself is calculated in a very simple way using practical calculators available on many bodybuilding websites. For example, if our calculated daily demand is 3200 kcal, we increase this amount by about 10 – 15 percent, so we should provide 3500 to 3650 kcal with meals daily. Of course these rates are individual for each body, that is why it is so important, at least in the initial phase of both the diet and the subsequent training for mass, to use the help of professionals in this field.

When planning the menu, we must take into account several extremely important factors, and one of them, often overlooked, is for example the type of our figure, the type of physique we represent, and the three most common groups are:

The type of figure has a direct impact not only on the diet itself, but also on the later strength training, the type of exercises that we will be able to do without risking damage to our health. We also already know, at least roughly, what must disappear from our fridge, but to the above-mentioned products it is worth adding a few more, and in the diet for mass you should definitely avoid:

Diet for mass – products that help build it

Initially it will be difficult to give up eating these types of products, but with time and a little strong will, they can certainly be replaced by others, full of essential nutrients. A dietician or even an experienced trainer at the gym can give us valuable advice, and what we eat while building muscle mass can be divided into several groups in terms of the content of specific nutrients, and the menu must include

Now that we know which groups of products must be included in our diet, we are able to compose daily meals, breakfast, lunch and dinner on our own or with a little help from a specialist. A large number of ready-made recipes can be easily found on the Internet, mainly on sites dedicated to bodybuilding and healthy eating in general. Differentiating them due to individual meals, we can finally arrange our healthy menu, choosing from such sets as:

Weight gain diet – the way you eat matters too

These are of course only sample recipes, giving you general information on how to compose tasty and at the same time healthy meals. Learning how to prepare them properly can take some time, so to make it easier for yourself it is worth sticking to a few rules saying that the amount of nutrients should be distributed as follows:

You can also adopt a weight principle here, choosing ingredients for each kilogram of body weight and in this case the distribution is as follows:

Equally important is the consumption of individual meals, of which breakfast remains the most important, restoring energy in the morning and giving strength for the whole day’s activities. It must be the most valuable and nutritious meal, but let’s not neglect dinner either, which replenishes all the calories lost during the day before going to bed. Another important rule to follow is to eat at least 5-6 meals a day, with regular breaks of preferably 3 hours between them. At the beginning it will certainly not be easy to force yourself to do this, but here, as with any diet, iron consistency and self-denial are required, without which you will not be able to achieve the desired results. Fortunately the whole process can be accelerated by using supplements supporting muscle mass development, and the one most often recommended by dieticians and professional trainers is Mass Extreme.

Fish in a diet for mass – why should you eat them?

Marine fish are a rich treasury of wholesome proteinof excellent assimilability, but this is not the only reason why it is worth making them a frequent element of your menu. They are a source of vitamin D, which is very beneficial to the muscle tissue, and which can be found in a small number of food products.

They are also a source of selenium, which builds immunity, and iron, which strengthens the body. You can also find in them vitamin E and A, zinc, phosphorus, potassium, magnesium, manganese and iodine.

Marine fish are also rich in omega-3 fatty acids and calcium, which are important for the functioning of muscles and cannot be omitted in the diet of people working to develop muscles.

Which fish to choose? First of all, we should choose marine fish. These may be:

Prepare a marinade of olive oil, lemon juice, pressed garlic, herbs, salt and pepper. Cut the fish into thick cubes and put into the previously prepared marinade. Put it in the fridge for an hour. Cut the pepper into cubes, leave the mushrooms whole or cut them in half. Cut the onion into thick slices. Thread the fish, peppers, mushrooms and onions alternately on skewer sticks. Sprinkle the skewers with herbs. Place in an ovenproof dish greased with olive oil and bake at 180 degrees for about 30 minutes.

2. easy fish soup with pieces of fish and vegetables

Cut the onion and leek into slices. Cut celery, parsley and carrots into cubes. Heat up 2 tablespoons of olive oil in a frying pan and throw in the vegetables. Add bay leaf, allspice, pepper and squeezed garlic. Fry for a few minutes. Transfer the fried vegetables to a pot, pour the broth, cook for a few minutes. Add fish cut into smaller pieces, cook the soup over low heat for another 5-10 minutes. Season the dish with parsley, herbal pepper, black pepper, sweet paprika, salt and lemon juice.

3. simple and quick fish from the oven

If using frozen fish, thaw it thoroughly. Make a marinade of olive oil, lemon juice, salt, lemon pepper, basil and thyme and put the fillets in it for about 20-30 minutes. Mix the mustard with a big pinch of curry powder. Place the fillets in an oiled ovenproof dish, spread mustard on top of each fillet and sprinkle with parsley or coriander and lemon pepper. Put the fish into the oven preheated to 200 degrees. After five minutes, reduce the temperature to 180 degrees. Bake for about 30 minutes.

Cut the onion in half slices, chop the leek. Grate the carrots, parsley and celery on a large grater. Cut the pepper and courgette into strips. Fry the vegetables in olive oil. After a few minutes add water, bay leaf, allspice and other spices. Stew for 5 minutes, add tomatoes and peas, stew for another 5 minutes. Cut the fish into smaller pieces, sprinkle with lemon juice, coat in flour and fry on a separate pan. Then add the fried fish to the vegetables and mix gently.