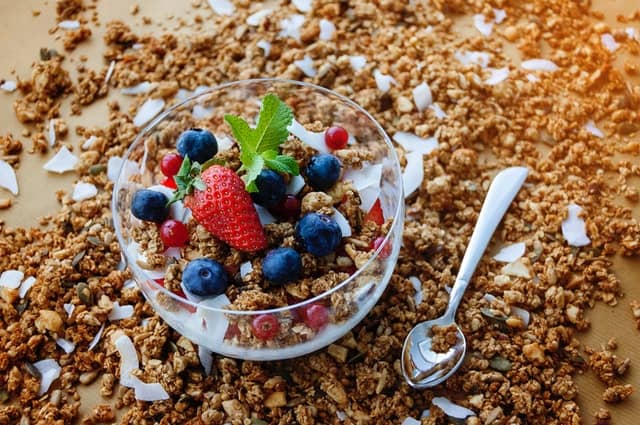 Dietary fiber, a dietary element without which it is impossible to be fully healthy

For some time now, there has been much talk about the important role of dietary fiber in the process of weight loss, as well as in the context of a healthy diet and proper bowel function. What is this substance and what effect does it have on the functioning of the body? Here are the answers to the most important questions.

Insoluble fiber, consisting of cellulose, lignin, and hemicellulose, absorbs water but does not dissolve in it, i.e. is not digested. Thanks to that, it stimulates intestinal peristalsis, regulates defecation, among other things, by softening and increasing stool volume.

It is said that insoluble fiber is like a broom or a vacuum cleaner, sweeping away impurities and debris from the gastrointestinal tract.

What functions does dietary fiber have in the body?

It would seem that since dietary fiber is not a source of energy, the human body does not need it. Fiber performs a number of very important functions, and its deficiency can lead to the onset or intensification of many dangerous diseases, such as liver disorders, atherosclerosis, diverticulosis, polyps, and cancer of the large intestine.

What is the role of dietary fiber? First of all, it participates in the metabolism in a specific way, influences the proper composition of the intestinal microflora, and stimulates peristalsis. In turn, modern medicine unequivocally states that the bacterial flora of the intestines is a factor determining health or illness in many cases.

Dietary fiber contributes not only to the maintenance of a proper microbiological balance, but also to the efficient functioning of the intestines. Fiber also plays an important role in the metabolism of fat, reducing the amount of triglycerides and lipids in the blood through their binding and increased excretion. The same is true for cholesterol.

Fiber regulates the mechanism of internal pancreatic secretion and improves metabolism in diabetics by delaying the absorption of glucose. This process of slowing down the absorption is also important in other aspects. Lowering the level of energy utilization from food helps in the fight against overweight or obesity, water absorption and swelling blocks the appetite, and slowing down the mechanisms of metabolism causes part of the food to remain undigested and unabsorbed.

Finally, fiber cleanses the body not only of metabolic debris, but also of toxins, thanks to the ability of pectin and hemicellulose to permanently bind heavy metal ions.

Special properties of dietary fiber in the metabolic process and more

One of the most important physical characteristics of dietary fiber is its swelling when exposed to water. This has far-reaching, positive consequences for the function of the digestive system, the metabolism, and a number of other metabolic processes. The most important health-promoting properties of fiber include the following effects:

Stimulating the growth of probiotics

Our digestive system is inhabited by microorganisms called probiotics, or good bacteria, which fight harmful microorganisms, increase the immunity of the body, and support digestion. Any changes in the natural balance of intestinal microflora result in not only digestive disorders. In fact, most specialists are of the opinion that many diseases are caused by improper functioning of the intestines.

Non-digestible dietary fiber, in the form of cellulose, pectin, gum, or inulin, is a food source for valuable probiotics. Therefore, it maintains an adequate number of beneficial bacteria in the intestinal microflora, which are necessary for proper digestion, production of antibodies, inhibition of pathogens, and activation of immune cells.

Regulation of the digestive process

In connection with its influence on the bacterial flora of the intestines and the gastrointestinal tract, dietary fiber stimulates the intestines to more efficient excretion of metabolic products, increasing, among other things, the excretion of fats in the feces. The regulatory function of fiber is also based on the fact that it prevents constipation and diarrhea. It is also important that plant fiber, swollen by binding water, provides a feeling of satiety, which protects us from excessive consumption of additional calories.

Cleansing the body of toxins and deposits

Fiber passes through the gastrointestinal tract, and especially the intestines, where it helps remove unwanted debris, which is mainly deposited between the villi of the intestines. In this context, fiber is said to play a role in the prevention of intestinal cancer, because it is an outstanding aid in cleansing the large intestine of deposits and toxins. Moreover, by acting as a purifier, it binds and removes all free radicals, as well as toxins and heavy metals from the body.

Fiber contributes to the reduction of cholesterol levels in the blood. On the one hand, it binds and removes cholesterol, on the other hand, it inhibits its synthesis.

An increased intake of fiber is also recommended for the prevention of diabetes. Dietary fiber in meals contributes to normalization and reduction of blood sugar levels. This happens as a result of slowing down the metabolism of carbohydrates.

Read also: How to lower sugar?

Reducing the risk of many diseases

In addition to the already mentioned colon cancer, in the prevention of which a proper structure of stool plays an important role, dietary fiber prevents various inflammatory conditions, reduces the risk of gallstones, hemorrhoids, varicose veins, and diverticulosis.

Moreover, although the connection seems rather distant, dietary fiber protects against caries, because it stimulates chewing function and secretion of strong, which protects teeth, and even improves the condition of skin, hair, and nails.

A large amount of dietary fiber in the diet is a valuable aid in the process of weight reduction. First of all, because fiber regulates the absorption of sugars and fats, by eating fiber we absorb less high-energy nutrients. In addition, fiber-rich foods are generally low in calories and lipids, and therefore helpful in maintaining a slim figure.

Another important feature of dietary fiber is its ability to absorb water, which causes the food to swell in the stomach, resulting in a feeling of satiation. This effect is produced primarily by pectin, which significantly increases its volume and becomes a kind of jelly. The feeling of satiety that appears after eating, successfully lasting for a long time, is also due to the process of slowing down gastric emptying and absorption of nutrients. All this promotes appetite suppression and, consequently, weight loss.

Nevertheless, the way of eating that plant foods force us to eat, especially in their raw form, is important. Since they are usually harder than processed foods, they require increased chewing and slower eating. Both of these things are good for our health, and they allow us to limit the amount of food we eat.

There is no doubt that dietary fiber promotes weight loss, not only through the above-mentioned effects, but also by regulating digestion and preventing various disorders of the digestive system. Therefore, it is worth enriching the diet with foods rich in this component, mainly cereal products, vegetables, and fruits, which in addition to fiber contain plenty of vitamins and minerals. However, since it absorbs water, you must not forget to drink plenty of fluids.

However, dietary changes should be made gradually, otherwise you risk stomach and intestinal disorders. There are also diseases for which a diet rich in fiber is not recommended – inflammation of the stomach, pancreas, bile ducts, gastric and duodenal ulcers, infectious diseases.

The richest in this respect are, among others

Whether for weight loss or simply for good health and fitness, a proper diet is always the basis. Sometimes, however, it may turn out that providing the appropriate amount of nutrients by natural means is, for one reason or another, impossible. Then high quality dietary supplements containing desired substances, in this case fiber, will be helpful.

There is a large group of preparations for slimming composed on the basis of dietary fiber. Very popular are supplements in a loose form, which after pouring them with water become a tasty drink, filling for a long time, and at the same time boosting metabolism and accelerating fat burning. It is worth noting that preparations of this type are often equipped with other components accelerating weight reduction.

Best market offers among slimming drinks based on dietary fibres