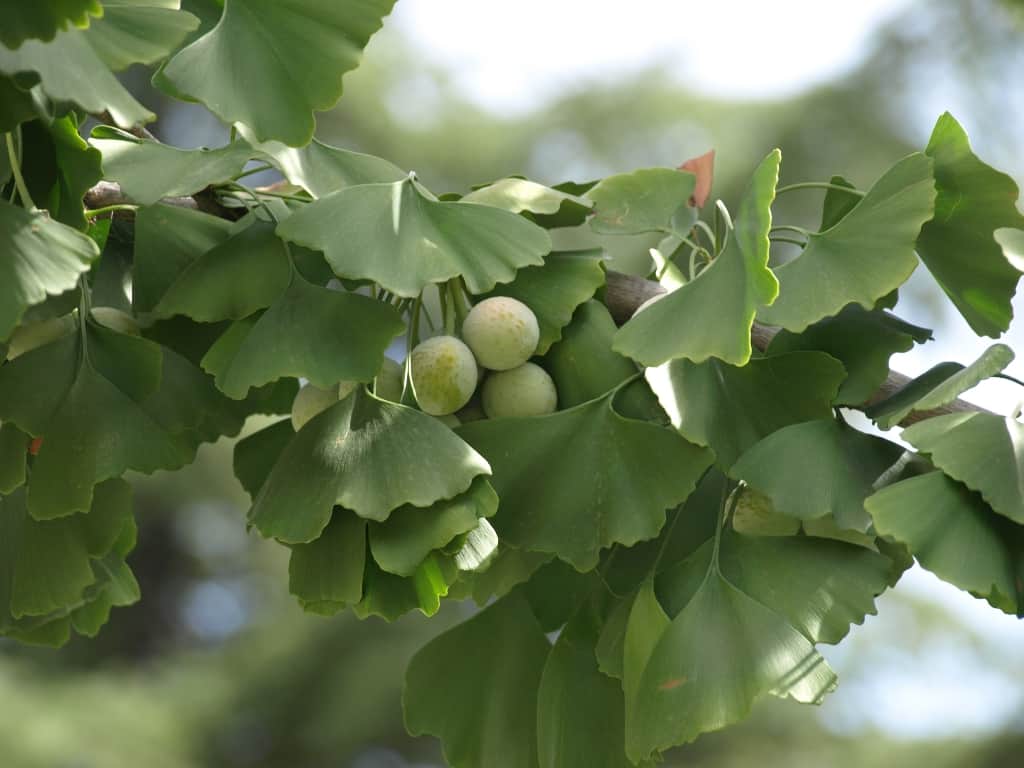 Ginkgo biloba, the plant commonly known as ginkgo biloba, is widely known for its medicinal properties. Due to the many studies conducted on it, its usefulness can be confirmed with certainty, especially in the area of better oxygenation of the brain and, consequently, a positive effect on its performance. Ginkgo biloba improves mental functions such as memory, concentration, learning ability and other thought processes. It also exhibits a number of other beneficial health properties.

Ginkgo biloba, or Ginkgo biloba, is native to southeastern China, from where it spread to other Chinese provinces and Japan in the 11th century. Hence the name Ginkgo biloba is commonly used, although it is not entirely consistent with the plant’s original origin.

Initially treated as a fruit tree (its seeds are still edible and eaten in China and Japan), it came to Europe around the 18th century primarily as an ornamental plant, and as such is now found in virtually all parts of the world. The oldest surviving specimen of the ginkgo tree in Poland, growing in the garden of the Łańcut palace, dates from that period.

It is a long-lived plant, living up to 4000 years, and its history on Earth dates back 200 million years. Such an impressive survival was possible because this tree has developed specific defense mechanisms. The ginkgo tree copes remarkably well with various types of microorganisms, industrial pollution and even radioactive radiation.

Gingko trees growing at the very epicenter of the atomic bombing in Hiroshima recovered after some time. In the Far East, the gingko is said to have magical properties – in addition to the above-mentioned characteristics, it is a symbol of fertility and fertility and is said to protect against fire.

Ginkgo biloba – the active ingredients of the plant

Ginkgo biloba owes its extraordinary potency to the abundance of powerful bioactive substances, more than 60 of them, mainly bioflavonoids, terpenes, hydroxy acids, steroids, among which quercetin, glucose, terpene lactones, rhamnose and others play an important role. The presence of these substances causes that ginkgo leaves, as they are used for medicinal purposes, effectively protect nerve cells, exhibit antioxidant and neuroprotective effects.

Perhaps the most important benefit of ginkgo is its exceptionally beneficial effect on the cardiovascular system, as it improves the functioning of the circulatory system by reducing tension in peripheral blood vessels, increasing their capacity and reducing platelet aggregation.

Some studies even confirm that ginkgo extract can prevent damage to brain cells caused by ischemia resulting from blockage of brain vessels. All this translates not only into better brain function and quality of thought functions, but also into reduction of cholesterol levels, normalization of blood pressure and inhibition of aging processes.

Among its many positive effects, it also has analgesic and mood-stabilizing properties, so much so that the Ginkgo biloba extract is recommended in cases of long-term fatigue, as an aid in the treatment of depression, and for women suffering from premenstrual syndrome and menopause.

Ginkgo biloba is also widely used in cosmetics. It is used as an ingredient in preparations for the care of vascular and sensitive skin, and to fight cellulite. The plant’s usefulness in this field is determined primarily by the presence of flavonoids and terpenes, effective in the fight against skin aging.

Flavonoids are strong antioxidants, they also block enzymes harmful to the skin that break down collagen and hyaluronic acid, increase collagen synthesis and improve the condition of connective tissue. Terpenes, in turn, inhibit the release of free radicals and minimize the risk of allergic reactions.

Both physical and mental activity are connected with a good condition of the body in the first case, and the brain in the second, although, as we know, both these spheres of human life are connected in a psychosomatic whole. Therefore, as well as the body, we should take care of our brain and mind, on which the quality of our life depends to the greatest extent. For high mental activity, the health of the whole organism, a healthy lifestyle, good sleep and rest, physical and mental exercises, and finally a proper diet for the brain are of great importance.

For these reasons it is worth reaching for natural preparations containing extracts from plants with a scientifically proven therapeutic effect. Ginkgo biloba, a.k.a. Chinese ginkgo, is characterized by particularly beneficial effects on the circulatory system, especially the cerebral circulation.

By improving oxygen transport to the brain, it improves its functioning and helps to maintain mental efficiency for a long time. It supports memory and concentration, perception and attention, influences the ability to think, facilitates learning. What is more, Ginkgo biloba extract protects nerve cells against free radicals and degradation processes.

These unique properties of ginkgo also give hope for the effective treatment of diseases such as dementia or Alzheimer disease, mainly due to flavonoid glycosides. They not only affect the quality of mental function, but also inhibit nerve cell death, have antiatherosclerotic, neurodegenerative effects.

Ginkgo extract – use in specific diseases and health problems

The flavonoid glycosides and terpenes found in ginkgo leaves have a wide range of effects and health-promoting benefits, which is why they are among the most commonly used herbal preparations. Drugs and supplements containing Ginkgo biloba in the form of extracts, juices and capsules are sold in Europe and worldwide in quantities reaching hundreds of millions.

The first group of applications are conditions resulting from circulatory disorders. Ginkgo biloba improves circulation, widens and strengthens blood vessels, reduces blood viscosity. Therefore, it will be helpful in treatment of hypertension, high cholesterol levels, prevention of strokes and other cardiovascular diseases.

However, of particular importance is this valuable plant for people complaining of too low brain activity in its mental functions. Since flavonoids and terpenes also have a beneficial effect on the blood flow in the brain, increasing the supply of oxygen and nutrients to the nerve cells, they thus contribute to better performance of our mind.

Peripheral circulation is also improved, so Ginkgo biloba extract can be used in cases of leg pain when walking, cold feet or hands, numbness and tingling sensations in the extremities. The analgesic properties of ginkgo will also be useful in many other pain-related situations.

Since the extract of this plant exhibits multidirectional activity, it can be considered a specification with unique attributes. In addition to the aforementioned, the active substances found in ginkgo have antioxidant and anti-inflammatory properties, and by blocking a number of unfavorable biochemical processes, they play an important role in the prevention of many conditions, from cardiovascular and respiratory disorders to macular degeneration and sexual function.

Read our review of a multi-ingredient product that improves brain function: Brain Actives