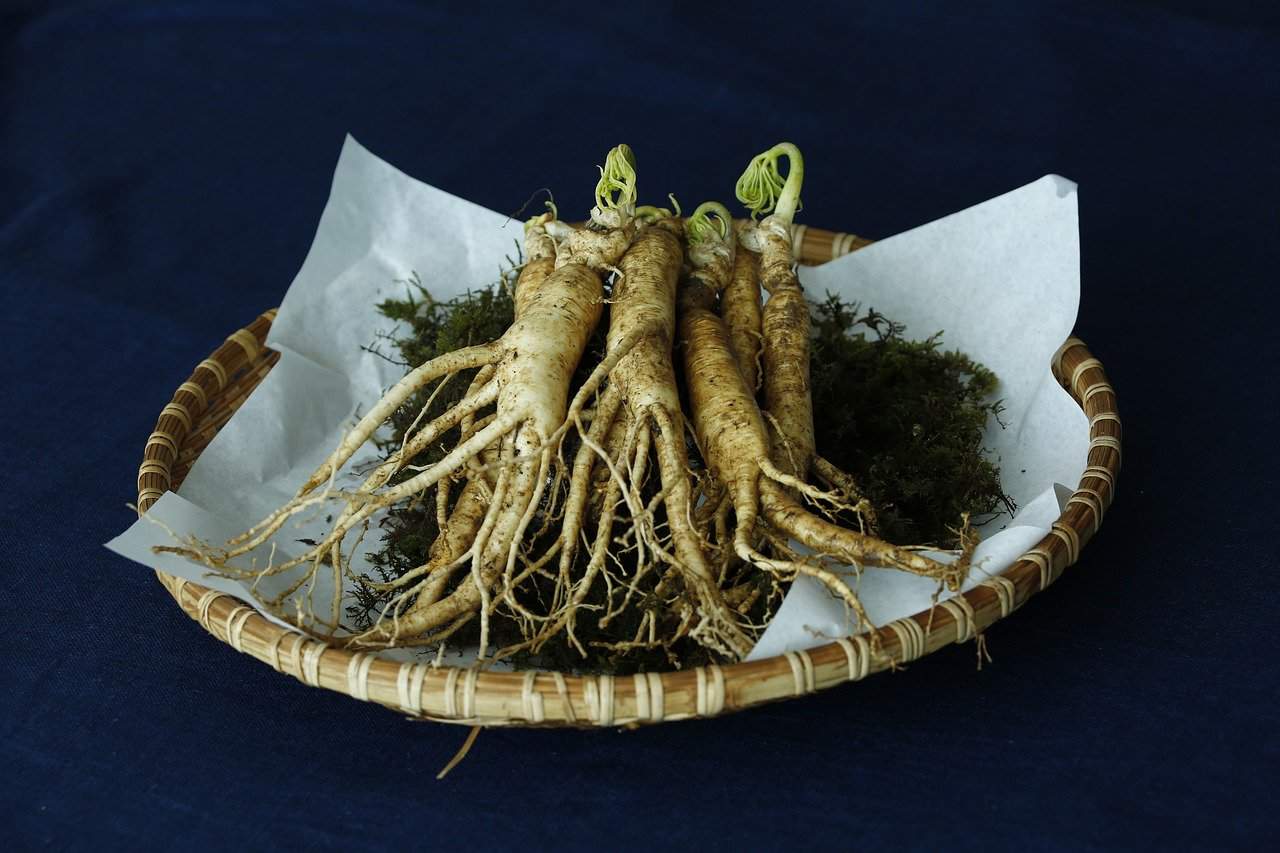 Ginseng (Panax ginseng, Chinese ginseng, Korean ginseng) is one of the most popular, if not the most popular medicinal plant among those originating from the ancient medicine of the Far East. It has been used many centuries BC as a remedy for physical and mental exhaustion and to combat sexual dysfunction. Of course, these were not the only applications of ginseng. In fact, it was a kind of antidote for various illnesses and ailments, which is where its common name – allspice – comes from.

Over the course of time, from the traditional Asian medical system, ginseng also came to us. Today, it is widely used as a natural remedy to improve the functioning of the entire body. Especially much is said about the beneficial effects of this extraordinary plant on brain function. Be sure to read about the health-promoting properties of ginseng and learn about other types of ginseng.

Ginseng, endowed with many sophisticated names (such as divine herb, root of life, lightning root, salt of the earth, wonder of the world, elixir of life) is one of the most frequently used raw materials in natural medicine. It is also very often referred to as an all-purpose medicine, which is understandable due to the variety of its applications when it comes to fighting various diseases and ailments.

Ginseng root is available in a variety of forms, including lightly crushed dried or powdered form. Ginseng extract is also added to numerous dietary supplements, such as those strengthening the immune system or improving memory. The market also offers herbal mixtures and teas with ginseng, as well as ginseng macerates and drops.

Ginseng(Panax ginseng) is a perennial plant belonging to the Aralia family. In its natural state, it occurs in China, Korea, Japan and eastern Russia; for industrial purposes, it is obtained from special crops. The main medicinal raw material is the root of the plant – light beige, thick and massive, not much branched, shaped like a man.

Ginseng grows up to several tens of cm in height, with a bare, single stem (about 50 cm) topped with a single five-leaved whorl. Over the years, a five-lobed leaf develops on the plant, and then (after about 10 years) a ground-level rosette with more numerous leaves. The flowers are small, white and pinkish or celadon, gathered in umbels. The fruit is a red drupe with two seeds.

Ginseng root is one of the most abundant natural resources in terms of the presence of bioactive substances. According to studies, it has about 200 active components, so it is not surprising that ginseng is one of the most widely analyzed and described medicinal plants.

The most important element of ginseng root are so called ginsenosides, found only in this plant. These are substances from the group of triterpene saponins, showing extremely beneficial influence on human organism. Among others, they make more oxygen molecules join hemoglobin, which results in better oxygenation and nourishment of cells, tissues and organs, more effective regeneration and overall improvement of psychophysical condition.

Ginsenosides are also powerful antioxidants which prevent the destruction and premature death of cells. These substances also support our immune system and protect it against all adverse health factors.

Apart from ginsenosides, ginseng root also contains many other valuable components, such as:

An impressive amount of bioactive substances means equally impressive medicinal properties. Ginseng has positive effects in many areas of the body.

It perfectly improves memory and concentration, plays an important role in controlling glycemia, can improve the functioning of the respiratory system, and finally guards the correct secretion of hormones and neurotransmitters.

Here are a number of the most recognized actions of the omega-drug and possible applications:

Panax ginseng is one of the most valuable plants endowed with immunostimulating properties, that is, stimulating the immune system to cope more effectively with adverse factors. The plant increases the activity of lymphocytes and macrophages, i.e. the cells responsible for destroying all pathogens (e.g. bacteria, viruses, fungi) and abnormal, unnecessary and damaged cells.

Interestingly, ginseng not only improves the immune response at the moment of invasion of harmful microorganisms into the body, appearance of degenerated cells, and occurrence of a disease process, but also stimulates the process of regeneration of cells and tissues.

Ginseng as a guardian of healthy circulatory system

The root of life has a positive effect on the work of the entire cardiovascular system. It improves circulation (including cerebral circulation), strengthens the heart and normalizes its work, prevents arrhythmia and regulates blood pressure. What is more, it contributes to lowering the level of bad cholesterol and inhibits platelet aggregation, thus preventing atherosclerosis, congestion and thrombosis.

Ginseng for a healthy liver

The effect of ginseng on the liver is relatively little discussed, and it is a very important issue. For those who suffer from dysfunction of a critical gland of our organism, i.e. the liver, ginseng may constitute an important link in its reconstruction. This is because the root of life shows strong hepatoprotective properties, protects liver cells from harmful factors, helps lower the level of liver enzymes, inhibits inflammation, supports the process of the gland’s regeneration.

Ginseng is a strong antioxidant

Antioxidants are needed to neutralize free radicals, too many of which in the body lead to many civilization diseases and accelerate the aging process. The excess of free radicals in the body can be caused by various factors, mainly related to an unhealthy lifestyle. These are among others: stress, poor diet, lack of exercise, stimulants, inhaling polluted air, frequent contact with chemicals.

If the level of free radicals is constantly high, the process of destruction and premature ageing of cells intensifies. As a result, the risk of cancer, atherosclerosis, coronary heart disease, bone and joint diseases and other diseases increases. The immune system also decreases and our skin ages faster.

In order to reduce the level of free radicals, we need antioxidants, which are present in many healthy food products such as fruit, vegetables and cereal grains. They are also found in high concentrations in many medicinal plants, such as the Panax ginseng in question. Systematic use of ginseng root will help us balance the level of free radicals and thus preserve our youth and vitality longer and reduce the risk of disease.

Ginseng benefits will also be appreciated by people suffering from disorders of sensual functions. Considered an aphrodisiac, the plant increases weakened libido and improves sexual performance, mainly thanks to ginsenosides. It increases nitric oxide production and regulates testosterone levels, as well as enhances blood supply to sexual organs, thus reducing erection and potency problems such as short-lived erection, incomplete erection, premature ejaculation and impaired ejaculation. Ginseng makes it easier to achieve a full erection and prolongs its duration, thanks to which we can enjoy a better quality of sexual life.

Ginseng for stress, depression and tiredness

As befits an omnivore, it has to heal not only the body but also the mind. Panax is distinguished by a whole range of properties which may prove very helpful in various nervous problems and impaired mental condition. Ginseng contributes to the group of adaptogens, substances which enable our bodies to better adapt to unfavourable conditions. Thanks to this property, we find it easier to cope with stressful situations, fight nervous tension, keep our distance from problems and block out negative emotions.

Apart from being a good guardian of internal balance, ginseng root is also an effective blocker of psychophysical fatigue. Thanks to it, we are less often affected by fatigue, discouragement and decreases in energy.

Ginseng as a protector of neurons

A very important role of ginseng is the support of nerve cells, i.e. neurons, and thus a better defence barrier against neurodegenerative diseases and lowering of intellectual capacity related to advanced age. Ginseng reduces the harmful effects of free radicals on nerve cells, protects neurons from damage and inhibits the process of their premature death. It helps to maintain good mental performance into old age, improves mental form and inhibits memory loss in seniors.

Another important aspect of ginseng’s effect on the nervous system is that it regulates levels of important neurotransmitters (e.g. dopamine, adrenaline, serotonin) and stimulates cerebral circulation and increases oxygenation of the organ, thus increasing mental potential.

Using ginseng root, we can count on:

Check out the best brain health supplement on the market: Brain Actives

Problems with sugar metabolism are a very common phenomenon nowadays. Our menus are dominated by foods which, unfortunately, lead to rapid fluctuations in blood glucose levels, resulting in attacks of ravenous hunger, weight gain, spurts of sudden sleepiness, worsening of mood and mental performance. With time, insulin resistance develops, which may later develop into diabetes.

To protect yourself from this dangerous disease of civilization, it is essential to switch to a healthy diet. Equally helpful can be discussed ginseng, one of the properties of which is a beneficial effect on carbohydrate metabolism. The plant regulates the amount of insulin secreted by the pancreas, and thus normalizes blood sugar levels.

Other types of ginseng

Not only ginseng proper is endowed with valuable properties for our body and mind. Other types of the root of life are also present in the dietary supplement market. Here are the most popular ones:

American ginseng (Panax quinquefolius) is a plant that grows wild and is also cultivated for industrial purposes in the United States and Canada. There it enjoys great popularity as a versatile natural remedy for many ailments. American ginseng, like Asian ginseng, belongs to the group of adaptogens. It reduces vulnerability to stress, increases adaptive abilities of the body, improves immunity, helps to more effectively and quickly fight various ailments, infections, colds, inflammations, hormonal disorders.

Siberian ginseng(Eleutherococcus senticosus, Eleutherococcus spinensis) belongs to the same family as ginseng proper and has the same health-promoting properties. The plant is cultivated in Russia and China but grows wild in many parts of Asia. Siberian ginseng is distinguished by its good adaptogenic properties. It effectively increases our resistance to stress, helps maintain balance in the system and improves the reaction of the immune and nervous systems when faced with various adverse factors.

The plant also has an excellent effect on mental performance. It improves memory and concentration, increases intellectual productivity and helps to avoid mental fatigue. What is more, Siberian ginseng has a positive influence on mood and eliminates depressive states, nervous tension, feelings of depression, anxiety and discouragement.