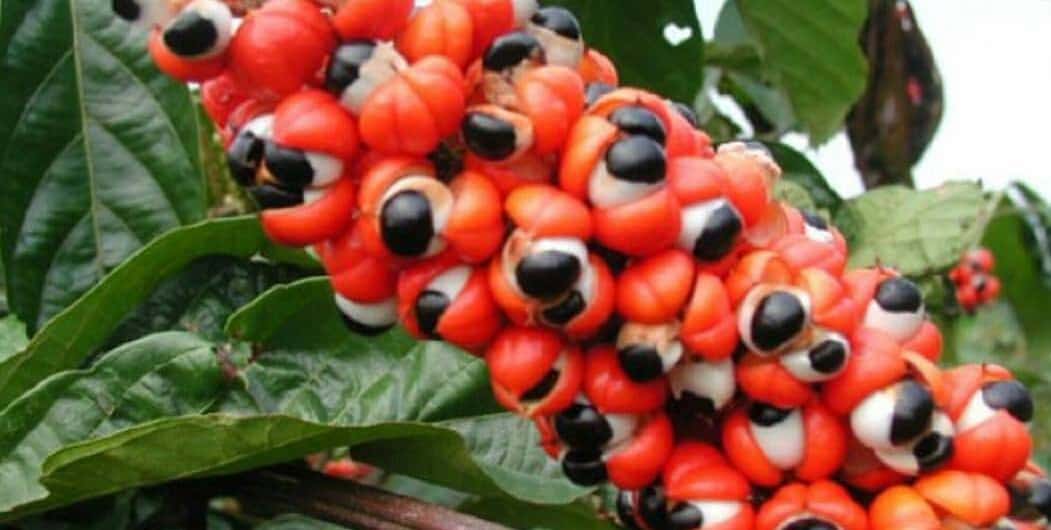 Guarana, supports weight loss, stimulates the body and mind. Discover the power of the Amazonian bean!

Guarana is an Amazonian plant whose action will be appreciated by people in the process of losing weight, as well as those looking for effective ways to stimulate the body and mind. It has incredible energizing and revitalizing properties, which are the result of the presence of several different stimulating substances. Sometimes, the effect of guarana is compared with that of coffee, however, according to many opinions, the former is better, because it supports our mood, fitness, health and figure in a more multidirectional and intensive way. Read the article and find out why it is worth using.

Garana – the Amazonian elixir of vitality

Paulinia guarana (Paullinia cupana), sometimes called wasp or thorn, but most commonly known as guarana, is a medicinal plant originating from Brazil (from the Amazon and Pará basins) with a long, rich tradition. Its qualities were appreciated by South American Indians many centuries ago. Among other things, the plant served as a remedy for fatigue and decreased vitality, and was also helpful in intestinal ailments and digestive disorders. To this day, it is still a valuable support for these and many other ailments.

In the West, guarana became popular around 3 centuries ago, and recently it seems to be gaining popularity. It is included in a growing number of dietary supplements and is increasingly used by people who value an active lifestyle, aim to slim or model their figure, as well as by people who are subjected to high intellectual effort.

Guarana – an interesting coffee substitute with a rich composition and effect

Displaying psychostimulant properties, guarana is an evergreen, creeping or climbing shrub with evenly-spaced, toothed leaves and small, white flowers gathered in clusters. The fruits are red in color and grow in clusters, inside them are single brown seeds that closely resemble hazelnuts. Guarana seeds are a widely used raw material, especially in the cosmetic, food, herbal and pharmaceutical industries.

Guarana extract is used in numerous creams and lotions with rejuvenating, revitalizing, firming and anti-cellulite properties. It can also be found in shampoos, gels and oils. In food products, it can be found in drinks, teas and snacks. When it comes to the market of herbs, medicines and dietary supplements, guarana extract appears in many preparations that strengthen and increase immunity, improve brain function, improve physical performance and support weight loss.

An invaluable advantage of guarana is its strong bioactive effect, which is the result of the plant’s rich composition. The energizing properties are due to caffeine, which is found here in much larger amounts than in coffee. The good news for people looking for plant-derived stimulants is that the caffeine from guarana (the so-called guaranine) is released more slowly than the caffeine from coffee, which is why we can count on more lasting effects (a few hours of stimulation at a constant level, and not, as after coffee – a short, yet intense stimulation, followed by a sudden end of the effect and a surge of sleepiness and fatigue).

Interestingly, apart from caffeine, guarana also contains other psychostimulants, such as theobromine and theophylline. A great advantage of this plant is also its high content of antioxidants, which makes it a weapon against cancer and other diseases of civilization, as well as premature aging. Other bio-components of guarana are:

Guarana properties. One ingredient, a multitude of benefits

Guarana is often referred to as the elixir of vitality and youthfulness, which is a fair statement considering the large amount and significant concentration of bioactive substances present in it and the range of properties that result from this impressive composition. The main benefits of Paullinia cupana include effective stimulation of the body, increased endurance and physical performance, and improved concentration, but these aren’t the only properties of guarana worth noting. Let’s take a look at the most important ones.

Let’s start with what guarana is best known for, namely its ability to stimulate the body, both in the physical and intellectual aspect. Thanks to caffeine, found here in the specific form of guaranine, as well as theobromine and theophylline, guarana activates the central nervous system, which translates into a surge of energy, increased motivation and will to act, elimination of the feeling of fatigue and sleepiness, improvement of exercise and endurance capabilities. Guarana has a positive effect on physical and mental form, allowing you to work and train longer and more efficiently.

As has already been mentioned, guarana works a little differently than coffee in this respect. It stimulates for longer, is highly bioavailable, well tolerated by the body and does not cause a sudden rise in blood pressure, heart palpitations, cold sweats, the effect of excessive stimulation or other negative effects which are sometimes caused by coffee.

The effect of guarana stimulating and improving the work of the nervous system also results in better functioning of our brain. Just like ginseng, Bacopa monnieri or Ginkgo biloba, it helps regulate the levels of important neurotransmitters and exhibits nootropic properties, thanks to which it “cranks up” the potential of our intellect. That’s why it’s often used by people who study and work mentally. It is also used by seniors, who due to their advanced age have problems with memory and reduced mental performance.

The most commonly observed effects of guarana when it comes to improving brain function are:

An important property of guarana (thanks to its high amount of antioxidants) is also the protection of the brain against harmful free radicals and the destruction and premature death of neurons.

If you’re aiming to lose weight, guarana can be a valuable support, since it exhibits a number of properties, including the acceleration of metabolism, which make the weight loss process faster and more efficient. The herb belongs to the group of thermogenic substances, which increase the body’s production of heat, increase its energy expenditure and contribute to increased calorie burning and more intensive fat breakdown, resulting in faster shedding of stored fat tissue.

Intensification of fat reduction is one thing, but it is worth noting that the plant supports us in continuing weight loss also at a mental level. It reduces stress, depressive states, apathy, discouragement, fatigue and fatigue, and in return increases motivation, stimulates, energizes, releases the desire to be active, and thus promotes an increase in the amount of movement during the day, which translates very positively into weight loss.

Guarana also helps to reduce the number of calories consumed and to stick to a diet menu, because it increases the feeling of satiety and suppresses the appetite. What’s more, thanks to its diuretic properties, the plant stimulates the detoxification of the body, reduces subcutaneous water and reduces cellulite.

Discover a supplement with guarana and 6 other fat burning activators: Piperinox

The antioxidant effects of guarana

Thanks to the presence of catechins and other highly bioavailable antioxidants, guarana seeds help reduce the amount of free radicals in the body, thus protecting cells from damage and lowering the risk of cancer, cardiovascular disease and neurodegenerative disorders. The antioxidants contained in guarana also help to generally improve immunity, strengthen the body and slow down the aging process. The herb also has anti-inflammatory and antimicrobial properties.

Guarana is a guardian of well-being

Guarana is one of those plants that show adaptogenic abilities, which means that it supports our body in adapting to various, often unfavorable conditions. It reduces vulnerability to stress, helps to keep distance to problems, eliminates negative emotions, relieves nervous tension. It has a positive influence on mood, promotes mental and physical well-being.

Guarana for potency and decreased libido

Both women and men complaining about weakened libido, guarana can help to regain appetite for sex. For men, its effects in this area are even broader – the plant fights erection problems, helps achieve a full erection and prolongs its duration. This is thanks to the fact that guarana helps regulate hormones and stimulates blood flow through the genitals. What is more, the plant gives you a boost and releases vital powers in you, which promotes better sexual performance.

Check out the dietary supplement with guarana for improved potency: Spermax Control

Guarana for skin and hair

The versatile properties of guarana also translate to beauty. The herb stimulates hair follicles, affecting faster hair growth. It eliminates body swelling and reduces cellulite. It has a firming, elasticizing and rejuvenating effect on the skin.

The variety of actions of guarana on our body and its effectiveness in fighting many common ailments makes the plant has many supporters. The most frequently emphasized advantages of guarana are a definite improvement in the work of the brain and effective stimulation, which lasts for many hours after taking it. In general, guarana is considered to be one of the best energizing substances on the market. It is effective, yet gentle on the stomach and free of negative side effects.

According to many opinions, guarana also works very well in the field of eliminating excess weight. It accelerates fat burning, makes it easier to control your diet, adds enthusiasm for physical activity and improves your mood, which is very important in the difficult period of losing weight. For many people, multi-ingredient dietary supplements that combine the power of guarana with the power of other valuable substances to accelerate fat burning (such as Piperinox or Cappucino MCT) are the ideal solution.