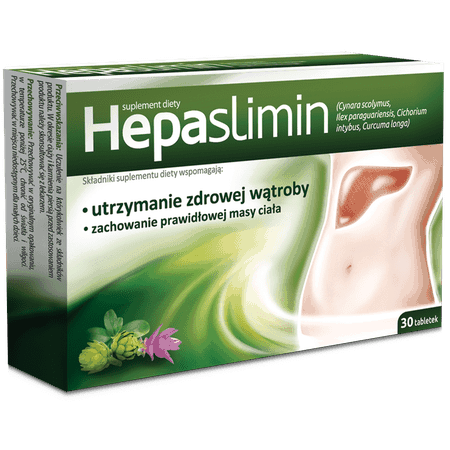 Hepaslimin – help for the liver and weight loss

Some time ago in pharmacies appeared a multi-ingredient dietary supplement called Hepaslimin, which is supposed to be a significant competition for other preparations of this kind. Composed of ingredients of natural origin, including mainly choline, it is designed to support the proper functioning of the liver, help in detoxification of the body and prevent lipid storage, which in turn also promotes weight loss.

Hepaslimin – the composition of the supplement

The two main substances that make up the formula of the product are L-ornithine aspartate and choline, which are also known from other products in this category. The salt of the amino acids L-ornithine and L-aspartic acid, namely L-ornithine L-aspartate, participates in the process of ammonia detoxification and has a significant effect on liver cell regeneration.

Ornithine is an amino acid which, although it does not participate in protein building, has a huge impact on very important vital body functions. It takes part in the urea cycle, influences the process of ammonia neutralisation, thus protecting the liver against its harmful effects. Moreover, ornithine is particularly useful in the treatment of serious liver diseases, such as cirrhosis, steatosis and inflammation.

Choline is an alkaline compound that has long been used to support liver function and combat disease states. It is a naturally occurring component of the body, and is a component of many phospholipids, including lecithin, which build cell membranes. Choline exhibits numerous prophylactic, protective, and therapeutic properties, especially when it comes to supporting proper liver function.

It helps remove toxins from the body, protects the liver from the harmful effects of viruses, alcohol, toxins, some medications, has an impact on preventing diseases of this organ and gallstones, and finally relieves symptoms of indigestion and facilitates the assimilation of hard to digest foods. Moreover, choline enables absorption of fat-soluble vitamins, such as: vitamin A, D, E and K, and in case of pregnancy it has significant influence on development of fetus nervous system and improves blood supply to placenta.

Another component of the supplement is artichoke herb extract, which is a valuable support for the liver. It has a significant influence on lowering the level of triglycerides and cholesterol, it also decreases the level of sugar in blood. It improves digestive system functioningby stimulating secretion of digestive juices and stimulating metabolism.

Artichoke herb extract supports detoxification of the body and generally helps to keep liver in good condition by preventing and treating pathological states of bile ducts and liver.

It also proves to be very helpful in fighting minor illnesses and ailments, constipation, flatulence, digestive disorders. It is also recommended in cases of hyperlipidemia, hypercholesterolemia and hyperglycemia. Apart from that, artichoke extract protects cells against damage and necrosis, inhibits accumulation of atherosclerotic plaques in blood vessels, thus protecting against development and progression of atherosclerosis. Artichoke is also said to have positive influence on skin and hair health.

Chicoryroot is an herb known and used by folk medicine for many centuries for liver problems. Chicory supports proper functioning of the digestive system and helps to maintain a healthy liver. It is caused, among others, by inulin contained in the root, a soluble fiber, which has a beneficial effect on the intestinal flora. Inulin is not digested, and it works by softening the digestive contents, lowering glucose levels, and supporting the removal of harmful substances from the body. This valuable ingredient is also found in other plants, but its richest source is chicory root.

It has long been known that using herbal spices facilitates digestion, especially of heavy meals. Turmeric is no exception in this regard. Its main active ingredient is curcumin, to which the rhizome owes its intense orange color and medicinal qualities.

Thanks to its properties supporting the functioning of the liver and digestive system , it prevents indigestion and flatulence, speeds up metabolism, minimizes accumulation of fat tissue thus supporting weight loss, lowers cholesterol levels and stimulates bile secretion. In addition, curcumin purifies the blood and is one of the strongest antioxidants – it has anti-inflammatory, antiviral, antibacterial and anticancer properties.

Extract of the leaves of the holly of Paraguay, or Yerba Mate

Called Paraguayan or Jesuit tea, Yerba Mate is an infusion of the leaves of an evergreen shrub growing in South America, whose benefits were first discovered by the natives and then by missionaries who settled the area. The extract from the leaves of the Paraguayan holly, due to its caffeine content, has a stimulating effect, stimulating the activity of the central nervous system, eliminating fatigue and improving mood. Yerba Mate is also said to be effective for rheumatism, arthritis, migraine, depression. No wonder millions of people around the world are drinking it.

The presence of Yerba Mate in the composition of Hepaslimin is due to yet another property of this plant, namely its beneficial effect on metabolic processes. It speeds up metabolism and thus contributes to maintaining a healthy weight. This unique tea is also a source of many vitamins (A, B1, B2, C, E) and trace elements, such as magnesium, potassium, calcium, iron. These ingredients and the abundance of antioxidants make Yerba Mate not only health-promoting, but also therapeutic.

In many cases our lifestyle, to put it bluntly, turns out to be disastrous for our body. Nervousness and haste, alcohol and other drugs, irregular diet dominated by junk food, sedentary lifestyle and lack of exercise cause us to suffer from various diseases and ailments more and more often. Various drugs and supplements are becoming a panacea, which are not indifferent to our liver, already overburdened with alcohol or a fatty diet.

To support this vital organ, it is worth reaching for a preparation such as Hepaslimin, based on ingredients of natural origin, and therefore completely safe for health. It will be a solid support for the battered liver and the entire digestive system.

Carefully selected individual ingredients have a beneficial effect on cleansing the body of harmful substances and efficient digestion, they help maintain the liver in good health, and in case of problems with this organ, they will contribute to their resolution and return to its proper functioning. Hepaslimin should be used by persons who would like to regulate the digestive system, in particular the liver, in a completely natural way.

Does Hepaslimin help with weight loss?

The manufacturer also emphasizes that the use of the supplement is accompanied by other positive effects. If you take Hepaslimin tablets while maintaining a healthy diet and exercising daily, you can also expect a reduction in body weight. You can say that this supplement is a strong ally in the fight for a healthy liver, and at the same time it helps you lose weight.

However, this is not a typical fat burner, with which we can record spectacular weight loss. For this purpose, there are other products enriched with substances that strongly stimulate metabolism, intensify lipolysis, block fat accumulation and suppress appetite.

Comments posted by Internet users are extremely different when it comes to assessing the effectiveness of the specific product. It seems that the main reason why opinions differ is the way the subject is approached.

Since Hepaslimin is not a typical slimming product, those who expected surprising results in a short time feel disappointed.

Meanwhile, the supplement is intended primarily to regulate the digestive process and liver function, which is a necessary but not the only condition for a slim figure. In other words, Hepaslimin will undoubtedly help you achieve it, but it certainly won’t replace other necessary requirements for slimming.

For a package containing 30 tablets Hepaslimin we will pay about 4 €. This is seemingly not much, but it is worth noting that the recommended dose is 6 tablets per day (3 times 2 pieces)! So one pack is enough for 5 days. Within a month we will have to buy as many as 6 such packs, which gives us a sum of about 20 € per treatment.

If someone cares about good liver support and weight reduction is only an additional effect, you can invest in this supplement. However, if you are looking for a supplement that FIRST and foremost speeds up the weight loss process, it’s better to save a few bucks and invest in a good fat burner.

Our recommendation – Green Barley Plus

Green Barley Plus is a prime example of an effective fat burner that, in addition to its main task of intense fat elimination and regular weight loss, has a number of other health benefits, including:

All this is due to the main ingredient of the preparation, i.e. young green barley equipped with a full set of substances having beneficial influence on our internal organs, metabolic processes and the appearance of our silhouette.

Intensive bioactive action of young green barley results in faster decomposition of stored fatty tissue. Additionally, this ingredient regulates digestive processes, eliminates constipation and bloating, suppresses appetite, provides the feeling of satiety, and prevents further fat accumulation. Our metabolism speeds up and the body is much more efficient in burning the calories delivered in the form of food.

The second component of Green Barley Plus is an extract from garcinia cambogia – it is an expert in suppressing appetite, which at the same time increases the process of lipolysis and blocks further accumulation of fat onthe body.

Green Barley Plus allows you to lose about 12 kg in 2 months – this is the optimal amount if you want to lose weight effectively without the yoyo effect. For more details, see our Green Barley Plus review.