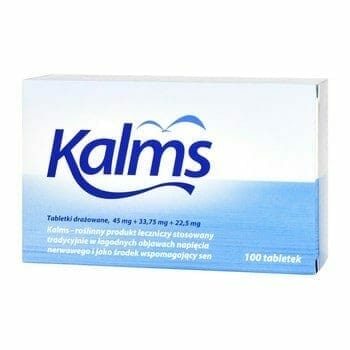 The modern world, unfortunately, is not conducive to living in harmony and peace. Haste, stress, excessive duties and numerous problems are the causes of many tensions, neurosis, sleeping problems and depression. No wonder that more and more people are reaching for a variety of remedies aimed at calming and soothing. One of the popular specifications recommended for mild states of nervous tension is Kalms.

In this case, we are dealing with a herbal medicine, the formula of which is based on an extract from hop cones, valerian and gentian. The preparation is dedicated to people who are perpetually overworked, have problems sleeping, live in a fast pace, strongly feel every stress situation and every problem to such an extent that it causes specific somatic symptoms, for example headaches and stomachaches or digestion disorders.

Kalms has a mild effect on the central nervous system, acting as a sedative and facilitating falling asleep. According to the manufacturer, it does not impair mental functions and psychomotor skills. It is said to be effective and not addictive, although it is worth remembering that even herbal preparations taken for a long time may contribute to the development of addiction.

Kalms – the composition of the specific product, that is what you will find inside the tablets?

How do the active substances in Kalms work?

Cones of hops have sedative effects as they inhibit activity of cerebral cortex and decrease sensitivity of some areas of central nervous system. In addition, hops have a battery-inhibiting effect, which is why they are used in gastric neuroses and digestive disorders.

Popular valerian, is the general name for preparations extracted from the roots of val erian. Used in herbal medicine for many years, it has been used to treat a number of conditions, including lung disease, as a diuretic, for headaches and cardiovascular problems. However, it is best known for its sedative and sleeping properties, but also for its mood-enhancing properties. It is effective in states of emotional and motor excitement, nervous tension, anxiety, sleep disorders. Additionally it shows diastolic action in relation to digestive system and regulating digestive processes.

Already used in antiquity,gentian is characterized by a wide spectrum of applications, especially when it comes to the digestive system. It helps not only in cases of ailments caused by external factors, but also when problems with indigestion, pain or other disorders have a neurotic basis.

Kalms – effects of the drug

The specific combination of hops and valerian is a long-known and often used formula used to combat problems associated with the nervous system. With this type of formula, Kalms is helpful for mild tension and stress, nervous hyperactivity, and trouble sleeping. The specificity has a soothing and relaxing effect, calms down, facilitates falling asleep, strengthens resistance to stressful situations. At the same time it does not weaken, but actually improves mental functions, such as concentration.

Kalms – dosage of the preparation

The drug is used orally, usually 3 times a day after meals taking 2 tablets of X1X. In exceptional cases, for example, problems with falling asleep, you may take one more dose 30 minutes before bedtime. The maximum daily dose is 4 times a day.

Do not give to children under 12 years of age.

Kalms – side effects and contraindications

In no case should you exceed the recommended dose. If, despite the use of the drug for a month, the symptoms do not disappear or the condition worsens, you need to seek medical advice.

Because the drug contains sucrose, individuals with fructose or galactose intolerance, lactase deficiency or glucose-galactose malabsorption syndrome should not take it. However, it may be used by diabetics. Allergy to any of the components may cause stomach and intestinal disorders.

Contraindication for the use of the drug is also pregnancy and breastfeeding.

The drug is recommended primarily to people who react strongly to stressful situations, including somatic symptoms in the form of gastrointestinal disorders and anxiety that prevents sleep. However, it is certainly not a remedy in case of more serious disorders – vegetative neurosis or neurotic states.

Kalms will certainly be useful in calming emotions and relieving tension. However, even in these types of situations, not everyone who has taken the drug praises its effectiveness. On the web, one may find opinions that the drug Kalms did not help, and only caused excessive sleepiness, or statements that contrary to the manufacturer’s claims, it impaired psychomotor skills necessary for driving a car.

It is worth mentioning that these are not the only herbal sedative pills available on the pharmaceutical market. For example, Melatolin Plus is one of the most popularly purchased specifications and it supports the nervous system.

Melatolin Plus, thanks to a wide range of proven herbal substances, has a calming effect, relaxes and improves mood, restores emotional balance, facilitates falling asleep and influences correct sleep rhythm. The supplement contains, among others, melatonin, which is a sleep regulator, lemon balm, ashwagandha root, hops cones, chamomile, vitamin B6. This formula makes it great for nervousness, lack of energy, bad mood and sleep problems.

Read more about Melatolin Plus

Check also: How to fall asleep fast and get a good night’s rest while sleeping?