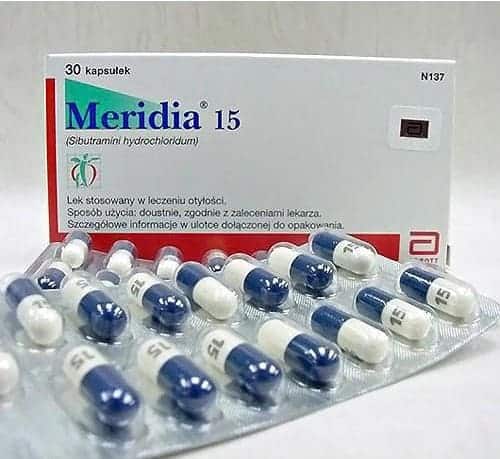 Meridia (sibutramine) is one of the most talked about drugs targeting obese and overweight people. Its popularity is not waning, although it has long been withdrawn from sale in European Union countries. However, it is still present on the black market, and unfortunately, in this illegal form, it often becomes a temptation for desperate people who want to lose weight at any cost. We say unfortunately, because buying drugs from uncertain sources can have very negative consequences. Read the article and learn more about the notorious Meridia.

What is Meridia and how does it work?

Meridia is a weight-loss drug that hit the market in 1997 and was originally intended to be a safer version of powerful anorectic (hunger-reducing) drugs with dangerous side effects. After some time, it turned out that also Meridia, or more precisely the active substance sibutramine contained in it, could cause a number of negative side effects. Studies have given clear evidence that the use of sibutramine is associated with an increased risk of heart attacks and strokes. As a result, Meridia slimming pills disappeared from pharmacies in the European Union in 2010.

The sibutramine contained in Meridia is a chemical compound that affects the central nervous system and causes the release of norepinephrine, serotonin and dopamine. One of the direct effects of sibutramine is a strong suppression of feelings of hunger. We feel as if the need to eat has been turned off for many hours. At the same time we don’t have any drowsiness attacks or loss of strength related to prolonged inactivity, on the contrary, we feel high energy level. What’s more, after sibutramine, our body enters a state of increased thermogenesis and increases energy consumption, thus burning calories more intensively.

So we have a “double effect” on slimming, because on one hand we don’t eat and don’t take in new calories, and on the other hand we intensively burn our fat reserves. However, not everything looks as idyllic as it may seem, because this way of losing weight may be fast, but in the long run it is completely ineffective and, what is worse, dangerous for your health. The effect of sibutramine related to the release of neurotransmitters is accelerated heart rate and psychophysical agitation, and its prolonged use can cause a lot of negative side effects, which will be described in the next paragraph.

Meridia tablets, whose active ingredient is sibutramine, has a strong effect on our body, both in terms of changing our mood and pure weight loss effects. The direct perceptible result of its action is a physical stimulation and an increase in performance. This means that we can be active for a long time, work at “accelerated speeds”, and at the same time not feel signs of fatigue. Another noticeable effect of Meridia is that it blocks the feeling of hunger.

It’s not hard to guess that reduced food intake, which goes hand in hand with high activity and high energy expenditure, gives very rapid effects in reducing body weight. If you are very obese, you lose weight very quickly, even 20 kilograms in a few weeks. If you are less overweight, the weight loss is smaller but still satisfactory.

Is Sibutramine really worth it? Pros and cons of Meridia

Weight loss after Meridia pills is fast and significant, sometimes even spectacular. However, this is the only advantage of this product. Unfortunately, torturing your body with this powerful drug has its price. When reaching for Meridia we have to be aware that our body is facing a revolution and we may not be able to cope with this revolution.

After taking sibutramine, whether in the form of Meridia or any other preparation, our heart is forced to work at a faster speed. This leads to increased blood pressure. In the long run, this can be too much of a strain on the heart. It is not without reason that the risk of heart attacks and strokes is said to double. If you take this drug, you may also suffer from high blood pressure or regurgitation of heart valves.

Negative side effects from the cardiovascular system after Meridia are not everything. Let’s not forget that the sibutramine it contains is a potent psychoactive substance that can cause addiction, as well as cause very unpleasant conditions ranging from mood swings, nervousness, aggressiveness, concentration and memory disorders, insomnia, to thought disorders, anxiety, depression and suicidal thoughts.

Other adverse side effects that may occur along with Meridia use include: headaches and dizziness, skin complaints, diarrhea, nausea, libido disorders, impotence, increased sweating, visual disturbances, dry mouth, and menstrual disorders.

As you can see, when you decide to take Meridia you are condemning yourself to a whole lot of negative side effects. The risk to our health and even life with this type of treatment is even bigger because nowadays Meridia and other sibutramine drugs are not allowed and we can buy them only from unreliable, illegal sources. So we never know what is really in those pills.

Meridia treatment in many cases brought more harm than good, as evidenced by numerous negative reviews about this product. Some people warn against taking Meridia, stressing that it is a very potent drug that, yes, strongly suppresses hunger and allows you to lose weight quickly, but at the same time makes you feel worse, changes your behavior and interferes with your normal functioning.

Many people talk about emotional disorders, outbursts of anger, falling into extreme states (once in euphoria, once in depression), sleep problems, a sense of disillusionment, anxiety, hyperactivity, all of which occur together with Meridia. Not to mention the negative purely physical symptoms such as palpitations, sweating, trembling hands, headaches, shortness of breath, upset digestive cycle, menstrual disorders.

There are also comments about addiction to the sibutramine contained in Meridia. Withdrawal from this drug caused depression or worsening of mood and only the next dose allowed to return to normal.

Learn how to lose 10 pounds fast

Substitutes for Meridia that contain sibutramine like Meridia include Lindaxa, Zelixa and Afibron. None of these are legal to buy in Poland. And if we would like to use such illegal products, we should ask ourselves first if it’s worth it to have physical and mental health problems if we can lose weight in a more natural way.

The preparation Keto Actives gives similarly good effects in weight loss as Meridia – it reduces appetite, gives energy and accelerates fat burning, at the same time it is devoid of all negative side effects. Not only does it not harm your health, it improves it.