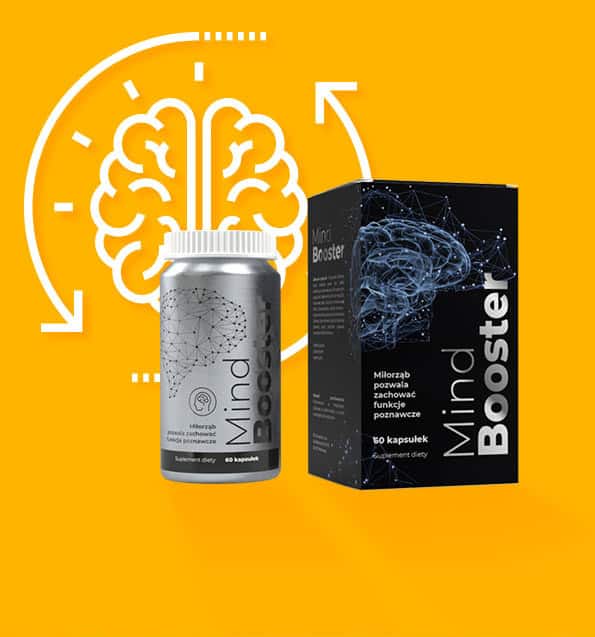 Mind Booster is a multi-tasking brain booster based on valuable nootropics and enriched with choline, which is important for correct functioning of the mind. The supplement is intended for everyone who would like to increase their intellectual potential, improve their memory, concentration and improve their performance at work or in sport. If you suffer from reduced mental performance, difficulty concentrating, assimilating knowledge or formulating your thoughts efficiently, if you suffer from lack of motivation, exhaustion and poor mental condition, Mind Booster may be an effective prescription for your problems.

Mind Booster is an interesting composition of nootropic substances which improve the work of the nervous system and regulate the levels of neurotransmitters, thus improving brain function and increasing its potential. Mind Booster supplementation will mainly benefit people exposed to high intellectual effort, but also all those who need any support in the mental sphere.

One of the most common health problems in today’s society is poor mental condition and disorders of cognitive processes such as thinking, memory, attention. They affect people of different ages and are characterized by a variety of symptoms. Their effect is almost always the same – lack of opportunity to maximize the potential of one’s mind translating into various difficulties in life and disturbed functioning in society.

Symptoms and causes of cognitive disorders and mental ill health

In the field of disorders of cognitive processes of the mind we most often struggle with such ailments as:

These and similar cognitive impairments are generally mild and fully reversible. A good tool to combat them are nootropic agents, such as the discussed Mind Booster, as well as an attempt to eliminate the very cause of the problem.

If we are talking about the causes of reduced mental efficiency and decreased mental form, the most common are:

How to improve brain function?

If our brain works in slow motion, if a bad mood is our frequent companion, if we complain about the disappearance of creativity, motivation and problems with concentration and memory, it means that the level of neurotransmitters in the nervous system, such as for example dopamine, serotonin, acetylcholine, is incorrect.

To improve the work of the brain and get rid of the annoying symptoms, we need to ensure that the balance of neurotransmitters is restored and that these substances are released in the right amounts. At the same time, a very important factor for improving the work of the mind is to stimulate cerebral circulation and increase the level of oxygenation of this organ. The use of a nootropic agent, which fulfils both tasks, is a good step towards a comprehensive improvement of the brain’s work.

Mind Booster is a nootropic that improves the functioning of the nervous system, stimulates blood circulation in the brain and guards balanced levels of neurotransmitters. In addition to these actions, Mind Booster also exhibits adaptogenic properties, making it easier for the body to adapt to often unfavourable conditions, which translates into increased resistance to stress and regaining of internal balance.

What else, apart from supplementation with nootropic drugs, can we do for ourselves to increase our mental efficiency? It is important to introduce a few small habits and lifestyle changes that will promote better brain nutrition and its more efficient regeneration. Particularly useful may be:

How to choose the right ingredients of a nootropic agent in order for it to effectively open our minds and improve our performance in various areas of life? The answer is known to the creators of Mind Booster, who focused on a trio of valuable plant materials improving the functioning of the nervous system and activating the brain to work better and more efficiently. The supplement also contains an ingredient stimulating the secretion of acetylcholine – an important neurotransmitter responsible for impeccable memory, excellent attention and the ability to quickly assimilate new information.

The main ingredients of Mind Booster and how they work

Ginkgo supports the nervous system, improves thinking, gives us creativity and ingenuity, improves concentration, increases the ability to remember and recall information. What is more, Ginkgo biloba has a very positive effect on the work of the mind in elderly people, prevents neurodegenerative diseases (including Alzheimera disease), reduces blood viscosity, acts as an anticoagulant, reduces the risk of atherosclerosis and stroke.

American ginseng is an antidote for lack of vitality, sluggishness, lowered mood and lack of motivation and will to act. The ingredient provides energy for a long time, eliminates psychophysical fatigue, allows to work or train longer and more effectively. It also has a positive effect on mood, combats mood disorders and reduces stress.

American ginseng has also positive influence on our intellectual abilities, memory and concentration. It stimulates circulation in the brain, increasing its potential and increasing the clarity of thinking. Thanks to strong antioxidants in a form of ginsenosides it protects our neurons against death and degradation and stimulates regeneration processes. American ginseng supports us both during education and at work, for instance, at work which requires precise thinking, creativity, analytical skills, ability to react quickly, alertness, and good reflexes.

Grapevine nourishes the brain, increasing our mental abilities, and at the same time revitalizes and strengthens the whole organism. It is a rich source of antioxidants, many vitamins, including B group vitamins necessary for proper functioning of the brain, as well as magnesium and other minerals improving work of the nervous system. Grapevines improve blood circulation, help the body cleanse itself of toxins, fight free radicals, and protect cells (including nerve cells) from damage. It has a beneficial effect on memory, facilitates the assimilation of new knowledge, improves the ability to focus attention and supports us during intensive mental effort.

Choline participates in the production of the vital neurotransmitter acetylcholine. It is acetylcholine that is the main link responsible for a well-functioning memory and concentration as well as clear, efficient thinking. By supplementing with choline, we can count on an increased release of acetylcholine, which in turn will bring us such benefits as: long-lasting, full concentration on demanding tasks, better efficiency of mental work, faster and more effective learning, improvement in the process of remembering and reproducing data, greater inventiveness and creativity, greater resistance to mental and physical fatigue.

Mind Booster – who will benefit from supplementation?

Take Mind Booster 2 times a day with a glass of water. This method of regular supplementation will bring us a lot of benefits when it comes to improving brain function. The multicomponent formula and complex action of the preparation means that practically everyone will benefit from its use. It may be particularly helpful for

Do you want to energize your brain and mobilize it to work better in many fields? Mind Booster may prove to be the perfect tool to achieve this. The supplement fulfills 10 key tasks thanks to which we can talk about an overall improvement in the functioning of the mental sphere and boosting mental performance to the maximum.

The 10 main effects of Mind Booster:

A significant improvement in mental performance is convinced by many people who had the opportunity to supplement Mind Booster. The product has satisfied both students and professionals who wanted to maximize the capabilities of their minds, as well as seniors who wanted to take better care of their brains, improve their work and protect themselves from dementia in the future.

The common opinion is that Mind Booster is an expert, well-composed formula that helps you get 100 percent of your mind’s potential, improve your performance, and enhance your quality of life.

If you are interested in Mind Booster nootropic formula, click here and go to the official website where you can order the product at attractive prices.