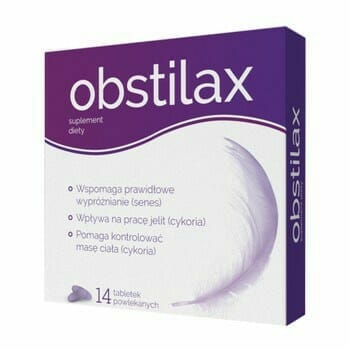 Obstilax and its impact on weight loss

Obstilax often ends up in the hands of people looking for effective weight loss pills. However, it is not really a fat burning product, but a constipation reliever. To some extent it may help you to achieve perfect figure, but on the other hand you cannot ignore side effects of taking Obstilax for a longer period of time, which you can read about in the article below.

Obstilax for weight loss – does it really reduce unwanted weight?

Obstilax is a constipation pill that often finds a place in the medicine cabinet of people struggling with weight. Overweight and obesity are often accompanied by ailments connected with disrupted bowel rhythm and slow metabolism, so it is not surprising that such remedies are in demand.

The problem is that they are often used in the wrong way – every day and for too long, and sometimes in too high doses. Some overweight people think that a laxative (such as Obstilax) is enough to get rid of the pounds – since it laxes, it quickly deals with the calories consumed and the fat deposits.

However, this is not how it works. The role of constipation remedies is only to stimulate intestinal peristalsis and provoke defecation, and not to accelerate the process of fat reduction, enhance lipolysis or inhibit fat absorption. Remedies for constipation do not have typical slimming properties, and possible weight loss is connected with getting rid of water from the body, so common in diarrhea, not with fat loss!

This does not change the fact, however, that in some way Obstilax may be helpful in losing weight – by eliminating persistent constipation and bloating, supporting metabolism, removing the feeling of fullness and heaviness or more efficient elimination of toxins from the body.

Sennosides lead to increased water secretion into intestines, intensification of intestinal peristalsis and contractions within colon. As a result, the process of moving diluted fecal masses accelerates and a laxative effect occurs.

The second ingredient of Obstilax tablets is chicory root extract, which improves intestinal and liver function and supports the process of cleaning the body of toxins.

Originally, the contents of Obstilax also included rhubarb extract, which shows similar properties to senescence. With this formulation, the product had a double, very strong (and dangerous to health!) laxative effect. Obstilax in the current composition, although it is a bit milder, can also be dangerous if used too intensively.

See proven ways to get a flat stomach

Obstilax stimulates intestinal motility, provoking the effect of defecation. The effect of the preparation is rapid and intensive. Most often, you will feel painful cramps in your lower abdomen and a burning need to have a bowel movement – just like during typical diarrhoea, for example, as a result of strong nervous tension or food poisoning.

The purgative effect of Obstilax can be uncomfortable, so people who are interested in this product often ask how long it takes for it to take effect. The effect occurs after a few hours, usually after 6-8 hours, so the best time to use this product is in the late evening before going to bed. This way, the laxative effect will appear right after waking up and not during the day, which could be very uncomfortable for us, especially if we were away from home.

As a laxative, Obstilax may cause some side effects, including dehydration and emaciation, which are dangerous to health and even life. The agent may also serve us with very unpleasant symptoms from the gastrointestinal tract, including abdominal pain and diarrhea.

One should also remember that all preparations with senesce, including Obstilax, if used frequently, lead to disruption of the natural bowel movement cycle and intestinal sluggishness. After withdrawal of senesse, intestines deprived of additional stimulation start to work slower, which may lead us towards chronic constipations. There is also talk of the addictive properties of senescence, which is undoubtedly worth watching out for.

Importantly, Obstilax has such a strong and violent effect that there are many contraindications to taking this drug. It should not be used by:

Caution should also be exercised when using Obstilax in case of gastrointestinal disorders and heart diseases (Obstilax may cause dehydration and potassium leaching from the body, which may harm the heart).

According to some opinions, the Obstilax speeds up weight loss and allows you to lose a few pounds fairly quickly. However, it is worth bearing in mind that weight loss after this agent is associated with a large loss of water from the body, not fat. There are also a lot of comments that this product doesn’t work in the long run – it acts violently, causes diarrhea and emaciates the body instead of naturally and efficiently supporting fat burning.

Obstilax is not expensive – we will pay a few € for one package, but we must remember that its action is one-sided. The preparation stimulates bowel function and eliminates constipation, but it will not give us slimming effects provided by advanced, multi-ingredient preparations for weight loss.

Remember that Obstilax is an agent for constipation, not for slimming. Using it for a longer period of time may seriously harm you – dehydrate, exhaust your body and upset your intestines. Therefore, we should use it only occasionally, once or for 2-3 days at the most, in a situation when we experience exceptionally bothersome constipation and problems with defecation.

If you are looking for a real slimming product which will regulate the bowel movement cycle in a natural and safe way, without diarrhoea, dehydration and abdominal pain, you may be interested in Probiosin Plus diet supplement which, apart from ingredients with a phenomenal effect on bowel function, contains substances which support fat burning, speed up metabolism and block appetite!