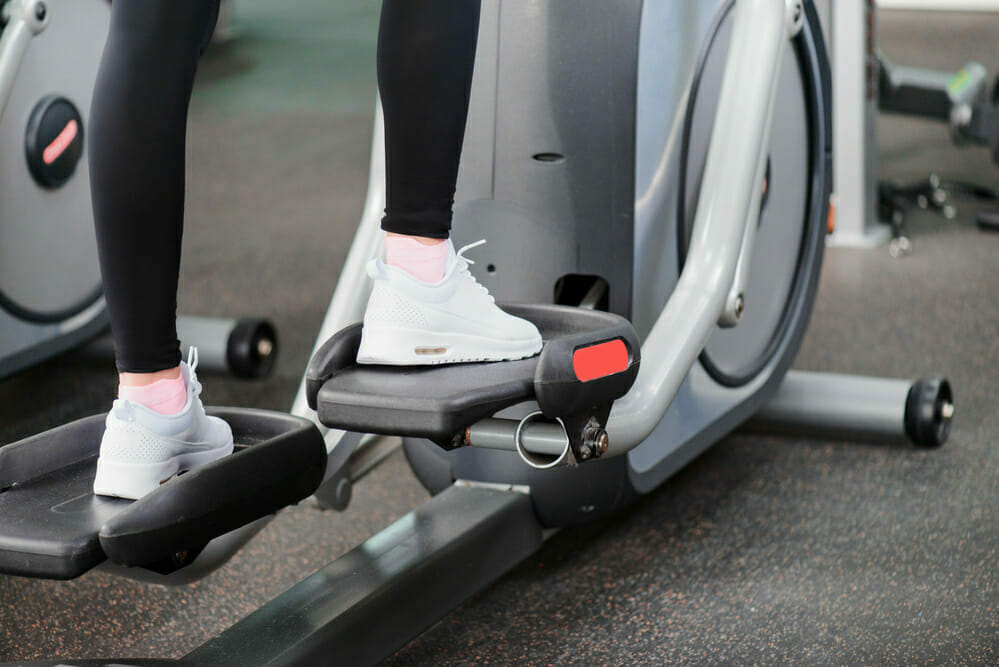 Orbitrek or bicycle – what to choose? Pros and cons of training on two popular exercise machines

Orbitrek or bicycle? This question is often asked by people who want to take care of their fitness and shape their figure in the comfort of their own four corners. Certainly the choice of exercise machine should not be accidental. It is a piece of equipment which will stay with us for a long time and which we will use intensively and often, therefore it should be well adjusted to our personal preferences. Better quality orbiters and stationary bikes are also not cheap equipment, so it is worth thinking twice before making a final purchase. What is worth emphasizing is that exercising on a bike and exercising on an orbitrek are different. The mechanics of movement is different, training is performed in a different position of the body and brings slightly different effects when it comes to body shaping. We should also take these issues into account before equipping our home gym with new equipment. So what to choose – a bicycle or an orbitrek? What are the effects of training on either machine? Is it possible to lose weight effectively while exercising on an orbicycle and a stationary bike?

Orbitrek or bike – the eternal dilemma of people exercising at home

Exercising at the gym, swimming, aerobics, group sports, training outdoors – not everyone feels like a fish in water in such forms of training. For many of us, due to the convenience and ability to fully concentrate on the exercises performed, the ideal training solution is to buy an exercise machine and install it in our own apartment, house or in a room such as a garage or basement.

The most popular are: treadmills, steppers, rowers, multifunctional atlases, orbiter bikes and exercise bikes, and the latter two are the most popular.

Both orbiter bikes and exercise bikes are very universal devices, shaping the shape and figure in many ways. They are practical, mobile (easy to move, carry), do not take up much space at home, they can fit even in a small apartment. They are also very simple, comfortable and pleasant to use. Moreover they are safe, they do not strain our body too much and carry small risk of injury.

Both stationary bikes and orbiters can be used regardless of age and training level. What is most important, with regular activity, both devices ensure visible effects on improvement of physical form and proportions of the body. However, there are some differences between an orbitrek and a bicycle, so it is worth taking a closer look at both types of equipment before making the final decision on the purchase.

The exercise bike is considered to be the best tool for cardio training (also known as aerobic or aerobic training). This is a steady, moderate-intensity workout where energy is delivered to the muscles through aerobic metabolism.

A steady, moderate pedaling pace over an extended period of time is an excellent way to get your heart rate up to an appropriate level for cardio training (approx. The cardio is a great way of achieving the right heart rate level for a workout (approx. 60-70% of maximum heart rate), and thus increasing cardiac efficiency, improving overall cardiovascular performance, improving body condition and reducing body fat.

An exercise bike is a versatile way to get an efficient cardio workout, but this type of equipment is also suitable for another popular type of workout, namely interval training.

This is an intense workout that involves a lot of effort on the part of the body. It is characterised by changeable tempo of exercise (a given exercise is performed alternately with very high and moderate intensity), which results in significant increase of endurance, strength, physical capacity and dynamic fat burning. That is why interval training, whether performed on a bicycle or in any other way, is very often chosen by people who want to lose weight fast.

What is worth emphasizing, training on a bicycle is not only a method for faster fat loss or improvement of health and shape, but also a way to strengthen the lower parts of the body. Training on a bicycle mobilizes our legs and hips to work, while shoulders, back and arms basically remain at rest. Therefore, regular exercise on a stationary bike very often brings the effect of better developed muscles of buttocks, thighs, calves and increase in strength and endurance of the lower limbs.

An exercise bike is a good choice for people who are looking for effective ways to cardio workout. It will also be a good option for people for whom cycling is one of the more enjoyed types of physical activity. On the other hand, it will not work well for people who are not fond of sports that are played in a sitting position, preferring more freedom of movement and the use of whole body motor skills.

The advantages of training on an exercise bike

Disadvantages of training on stationary bike

Orbitrek – a clever device mobilizing the whole body for activity

Anorbiter is another universal exercise machine with a wide group of followers. Although they are a bit bigger and require more space at home than compact bikes or steppers, treadmills are one of the most popular training devices. In terms of popularity, they are catching up with treadmills and exercise bikes and, just like them, they are most often chosen by people whose main goal is to lose weight and slim their figure.

When is it worth using an elliptical tracker?

An elliptical tracker (also known as an elliptical trainer) is perfect for aerobic training, performed at a moderate, constant pace, as well as interval training, performed at a variable (once high, once moderate) intensity. An orbiter, similarly to a bicycle, is a very universal piece of equipment, used for many purposes, both typical for the figure, and pro-health ones.

Regular exercise on an orbiter is a good option if we want to comprehensively improve our physical form, gain strength, improve immunity, strengthen the muscular and skeletal system, and lose excess weight. The half-hour or hour sessions on an orbitrek are also a good support for strength training for sculpting and for gaining muscle mass.

When we exercise on an orbiter, we make movements with our lower limbs similar to those performed on a stepper or a bicycle (they also resemble movements performed on cross-country skis). At the same time, we dynamically move our arms using two vertical handles.

The specific design of orbiter machines results in engaging almost all body parts during training, including: shoulders, back, abdomen, buttocks, thighs and calves. Thanks to the intensified work of muscles and large amounts of energy used by the body during exercises, regular training on an orbiter is extremely effective both in the process of burning redundant body fat and body shaping.

According to many opinions, exercises on an orbiter are better than exercises on other equipment, such as a stepper or stationary bike, because involving more muscle groups and forcing the body to work more intensively, they give faster results.

There is no doubt that an orbitrek is the optimal choice for those looking for a universal exerciseThe orbiter is undoubtedly the optimum choice for those looking for a universal exercise machine, which can be used for both endurance and interval training, and which engages all muscle groups in work. It will also appeal to people who count on a significant increase in calorie burn and rapid elimination of body fat. The final choice of an orbitrek or a bicycle (or other equipment), however, depends on our individual expectations and preferences.

Advantages of training on an orbiter

A magnetic orbiter is a moderately noisy device, however the exact noise level depends on a particular model. It is certainly less noisy than its older brother, the mechanical orbiter. In general, magnetic orbiters are equipped with resistance regulation, which makes it easier to adjust the level of training to your needs.

A more modern, but also more expensive device is an electromagnetic orbiter. The machine is controlled by a built-in computer, and the braking mechanism is based not on magnets, but on an electromagnet. The electromagnetic machines are less noisy than the magnetic ones and are usually used in gyms and fitness centers.

An orbiter for home – which model to buy?

The main factor which determines the choice of a model of an orbiter is your budget. The price of an orbiter is much higher. If we do not have much money, it is better to refrain from buying it and to collect some money or to decide to buy it by installments and buy good quality equipment.