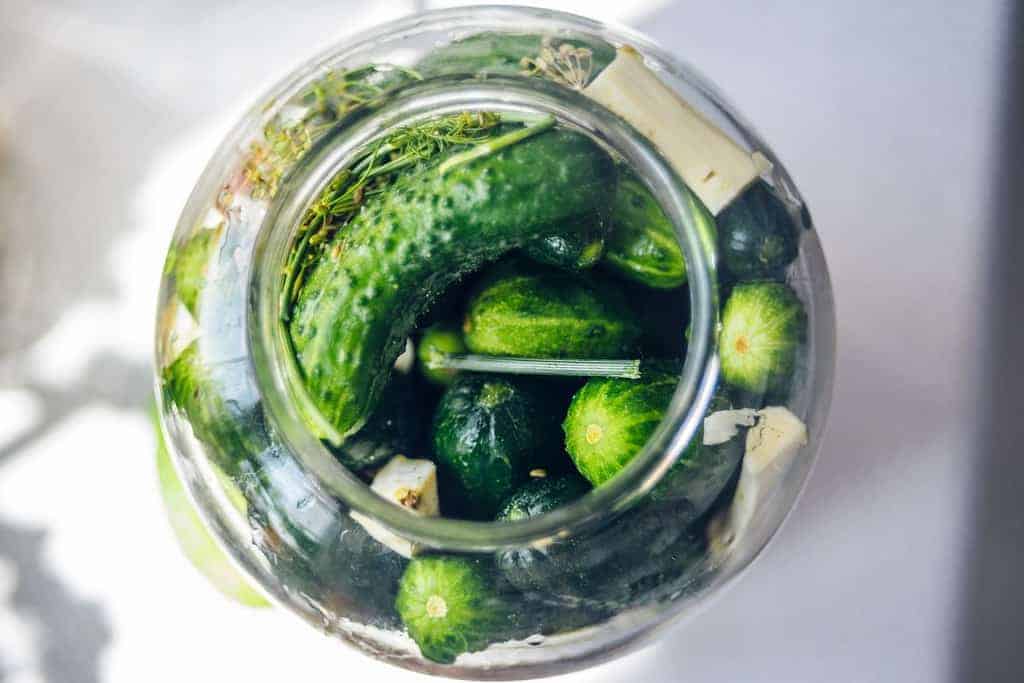 Pickled cucumbers are an ingredient appreciated for taste but underestimated in terms of health-promoting properties. They provide many vitamins and minerals and are one of the best sources of probiotic bacteria which have a significant impact on our immunity and slim figure. Read about the beneficial effects of pickled cucumbers, see how they affect weight loss and learn about interesting ways to use them in your kitchen.

Crispy, refreshing, pleasantly sour – we usually eat pickled cucumbers for their taste, no one thinks about the fact that we are eating a healthy specimen rich in valuable ingredients. In pickled cucumbers we can find a large dose of vitamin K responsible for proper blood clotting, as well as a number of other vitamins: vitamin C strengthening the immunity and blood vessels, vitamin A taking care of beautiful skin and strong hair and nails, vitamin E, B vitamins improving the condition of the nervous system. We also have a whole range of bioelements guarding the proper functioning of the body: calcium, potassium, magnesium, phosphorus, sodium, iron, zinc, copper, manganese.

What is important, pickled cucumbers contain a lot of dietary fibre and probiotics – both these elements affect the proper functioning of our intestines and support the process of losing kilograms. They also contain phytosterols, which contribute to the decrease in the level of bad cholesterol and antioxidants (e.g. anthocyanins), which have anticancer and anti-aging properties.

Both pickled cucumbers and other pickles (e.g. sauerkraut, pickled beets) are an excellent source of probiotics, i.e. lactic acid bacteria that populate our intestines, where they act as a natural guardian of a strong immune system. Other products in which probiotics can be found include: fermented milk products such as kefir, yogurt, cottage cheese, buttermilk, as well as bread acid, fermented vegetable drinks, fermented soy products (e.g. tempeh).

Probiotic bacteria perform many tasks in the body, including protecting us from fungi and microorganisms that cause various infections and diseases, regulate digestive processes, prevent gastrointestinal ailments, support normal bowel movements, relieve symptoms of allergies and food intolerances, improve intestinal function , and eliminate inflammation. Apart from building a healthy bacterial flora and supporting the body’s immunity on many levels, products rich in probiotics also help remove toxins from the body and eliminate excess body weight.

Unfortunately, despite the indisputable benefits of probiotic bacteria, our diet is generally too poor in them, which often has an adverse effect on our health. So if we want to boost our immune system, regulate digestive processes, support intestines in their work and intensify the process of reducing excess weight, it is worth starting to systematically reach for both the pickled cucumbers and other products containing lactic acid bacteria.

Read the review of fat reducer with probiotics: Probiosin Plus

Consuming pickled cucumbers, even often and in large quantities, we do not have to worry about possible weight gain. In fact, cucumber is one of the least calorific vegetables, because it consists mostly of water. Fresh cucumber contains only 14 kcal in 100 g, and pickled cucumber is even less caloric, because during the pickling process sugars present in the vegetable are converted into lactic acid. In 100 g of pickled cucumber we find only 12 kcal. This means that eating one medium-sized pickled cucumber we provide the body with about 7 kcal, eating 5 cucumbers we consume only 35 kcal – these are negligible amounts.

It is also worth noting that pickled cucumbers have a low glycemic index, so they do not cause sudden spikes in blood sugar, and thus do not affect the accumulation of fat tissue. Therefore, they can be successfully added to the menu of many weight-loss diets, especially those where low-carbohydrate and low-glycemic index products prevail (e.g. Montignaca diet, South Beach diet).

Canned cucumbers have slightly more calories than pickled ones, 23 kcal per 100 g. This value is increased due to the pickling process. The vinegar marinade contains sugar, which inevitably gets inside the vegetable. However, 23 kcal is still a small amount, so pickled cucumbers are as safe for the figure as pickled ones. However, they are incomparably poorer in nutritional value. Due to marinating in vinegar they are deprived of vitamins and minerals. They also do not contain invaluable probiotics.

They are low in calories, easy to digest and perfectly fit for people on a weight-loss diet. Thanks to dietary fibre contained in them, they give the feeling of satiety, reduce appetite and counteract attacks of ravenous hunger. Thanks to probiotics present in them, they speed up metabolism and inhibit the process of accumulating fat tissue. They also promote efficient detoxification of the body, and a purified body can easily and quickly cope with losing excess weight.

Lactic acid bacteria and dietary fiber, which are not lacking in pickled cucumbers, also do another important job for people losing weight, namely they have a positive effect on the intestines, improve their work, regulate the rhythm of bowel movements, prevent constipation, flatulence, excessive gas production and other ailments related to the digestive system. In this way they help us get rid of the unpleasant feeling of fullness and heaviness, eliminate the effect of protruding, swollen abdomen and affect the slimming of the waist area.

To sum up, pickled cucumbers support weight loss, because:

It is worth adding that the slimming and health-promoting properties have not only the cucumbers themselves, but also the juice from the pickled cucumbers. Both of these products can support the reduction of excess weight, but rather as an addition, not as the main method of weight loss. If you want to quickly and efficiently get rid of excess weight, it’s best to act in a multi-faceted way – use a light diet with reduced calories, often reach for probiotic products (such as cucumbers and sauerkraut, pickled cucumber water, sauerkraut juice, buttermilk, kefir, yogurt), introduce a form of physical activity you like and take dietary supplements that speed up the reduction of fat tissue.

Check ranking of the most effective slimming pills

How to pickle cucumbers – a simple recipe for a tasty snack

Home pickled cucumbers are the best. Preparing them ourselves, we can be sure that they have not been treated with preservatives and the pickling process took place in a natural way. Producers of pickled cucumbers sometimes add vinegar or other additives which unfortunately lower the value of the preserves. So if we have to use pickled cucumbers, we should always read the ingredients on the packaging. If you want to prepare pickled cucumbers in your own kitchen, we suggest the recipe below – it’s simple and guarantees really tasty, aromatic and extremely healthy pickled cucumbers.

Start pickling the cucumbers by washing them thoroughly. Peel the horseradish root, rinse and cut into small pieces. Rinse the dill. Divide the garlic into cloves, peel off the shell. Boil the water in a pot, add salt, allspice, bay leaves and mustard. Stir, remove the water from the gas.

In a clean, dry stoneware pot arrange the cucumbers tightly and horizontally. Between each layer put dill, garlic, horseradish root and optionally horseradish, cherry or currant leaves. Pour slightly cooled but still warm water with spices over the cucumbers. Put some dill on top. Cover it with a plate (it should fit inside the stoneware), weigh down with a stone or a jar with water. After about 3 days you will get small-salted cucumbers, with every following day the cucumbers will become more and more pickled.

Pickled cucumbers are a great addition to pastes, cottage cheese, snacks, salads, salads and sandwiches – they add acidity, crispness and a strong character. We can also enrich slimming cocktails with them from the blender – they are an interesting composition with, for example, apples, zucchini, spinach leaves, kale, radishes, tomatoes. In addition, in some cocktails the juice of pickled cucumbers will also work. When it comes to hot dishes, the most famous example is cucumber soup, but we can also add them to baked, roasted, fried and stewed dishes. And here are some examples of dishes with pickled cucumbers, ideal for people losing weight:

Remove the mackerel bones and shred with a fork. Add the cottage cheese, which you should also shred with a fork. Add a spoonful of natural homogenised cheese (or optional natural yoghurt) and mix. Try to make the cheese and fish combine into a homogeneous paste. Cut cucumbers into small cubes, chop parsley, add both ingredients to the paste. Add another spoonful of cheese or yoghurt, as well as salt, paprika and pepper. Mix thoroughly.

Salad of pickled cucumbers, carrots and apple with a spicy note

Grate the cucumbers, carrots and apples on a large-mesh grater. Cut the leek into rings. Chop the pepper finely. Mix all the vegetables, add oil or olive oil, season with salt and sugar (or xylitol).