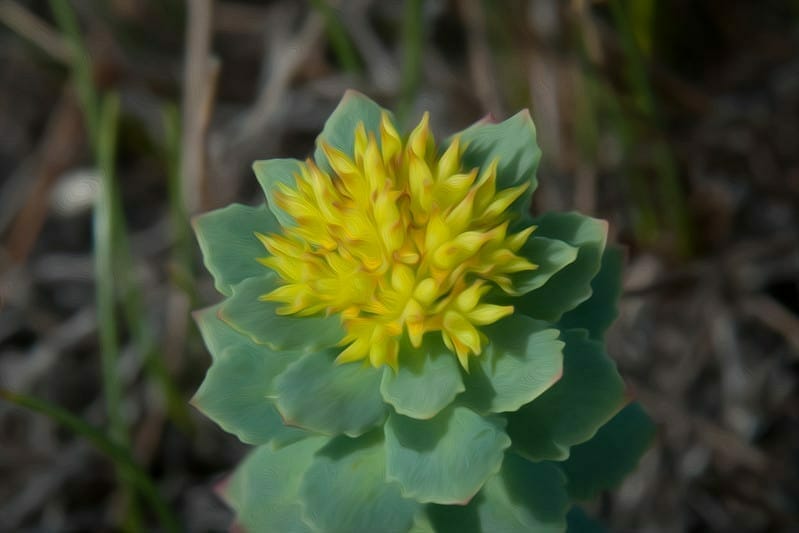 Rhodiola rosea, or golden root for stress and mental balance. Discover the extraordinary qualities of this plant

Golden root, rosehip, Aaron’s rod, royal crown, arctic root – these are the names used to describe the plant professionally known as Rhodiola rosea (Rhodiola rosea). These fantastic epithets perfectly reflect the extraordinary qualities of the plant as a medicinal herb. The essence of its influence is that it belongs to the so-called adaptogens, i.e. plants facilitating the body’s adaptation to stress in a broad sense. Rhodiola rosea is particularly useful in restoring balance to the nervous system and improving intellectual functions.

Rhodiola rosea – origin, occurrence and composition of the plant

Rhodiolarosea is a plant belonging to the thicket family, which has been known for centuries in Chinese medicine and used for medicinal purposes by Eurasian peoples since ancient times. It can be found in arctic and high mountainous areas of the northern hemisphere, in Europe, Asia and North America. And although official studies of its properties began only in the 20th century, folk medicine had already attributed to the golden root the ability to increase physical and mental efficiency and resistance to stress, which has been scientifically confirmed today.

The rhizome and roots are used for medicinal purposes, as they contain the most valuable substances. These include rosavin, which reduces stress levels and helps restore the body’s natural balance, and salidroside, which protects neurons from oxidative stress.

In addition, Rhodiola rosea contains other valuable compounds such as flavonoids, phytosterols, catechins, proanthocyanidins. Thanks to its rich content, the plant proves useful not only for the nervous system and mental functions, but also for treating a number of other health ailments.

Rhodiola rosea as an example of a plant adaptogen

Most often, we understand stress as a state of nervous tension. However, from a medical point of view, a stressful situation is always present when specific internal or external circumstances disturb the natural balance of the organism.

Plant adaptogens do not treat specific conditions, but rather restore stability and balance to the functioning of organs and systems so that the body can cope with adverse conditions. Adaptogens have a protective function in relation to organs and organs, strengthen immunity, and thus make it easier for the body to adapt to existing conditions.

As an adaptogenic herb, Rhodiola rosea, among many other things, has a beneficial effect on the nervous system, improves resistance to stress, supports brain function, improves memory, concentration and learning ability. It adds strength and energy, it also shows anti-depressive properties. Importantly, the active ingredients in Rhodiola rosea help reduce stress levels and adapt to the situation at hand, without interfering with normal bodily functions, but only to the extent necessary to restore balance.

Among the numerous qualities of Rhodiola rosea are:

Positive effects on the nervous system and psyche

This plant has a positive effect on the work of the immune system. By stimulating the production of NK cells, i.e. specific immune cells which play a special role, it increases the immune activity of the body and influences the restoration of homeostasis.

Arctic root significantly increases the efficiency and endurance of athletes, causing an increase in anabolic processes and efficient use of energy reserves. At the same time it exhibits anti-inflammatory effects and helps protect muscle tissue from damage.

While displaying a unique property of minimizing the effects of hypoxia, Rhodiola rosea also effectively destroys free radicals, has anti-coagulant and anti-carcinogenic effects. Thanks to the content of salidroside, it also protects neurons against oxidative stress, preventing neurodegenerative diseases.

Since the active substances found in the rhizomes and roots have anti-inflammatory and antioxidant effects, Rhodiola rosea can be used successfully in the prevention of various diseases as well as to delay the aging process. It is also recommended during periods of fatigue, weakness and convalescence as it strengthens both the body and the mind.

The importance of mountain rhodiola for better mental condition

Rhodiola rosea extract helps to restore mental and emotional balance, , regardless of the length of the stress experienced. The effect of the plant as an adaptogen is wide-ranging, as on the one hand it stimulates the nervous system, while on the other it has a calming and relaxing effect. It activates mental functions and simultaneously reduces tension, stabilizes mood and eliminates fatigue.

Stimulation of the nervous system

Substances called nootropics play an essential role here, having a beneficial effect on a number of processes in the central nervous system. Firstly, they increase mental abilities by increasing their efficiency, and secondly, by normalising the work of the nervous system, they promote relaxation and mood improvement.

This multidirectional effect of nootropics, or brain boosters, including rhodiola rosea, is a result of their specific properties, namely they control neurotransmitters, substances responsible for transmitting signals between nerve cells, such as dopamine or serotonin. In addition, nootropics regulate the connections between different areas of the brain and increase its blood supply.

Brain boosters definitely affect the quality of mental functions. They increase the efficiency of thinking processes, improve concentration and the learning process, and enhance memory. That is why Rosemary is recommended especially during periods of intensive mental activity, because it undoubtedly develops our intellectual abilities.

Another important feature of Rhodiola rosea, like other plant adaptogens, is that it increases resistance to all kinds of stressful situations and restores natural balance, primarily mental. Studies have shown that the substances in rhodiola lower levels of cortisol, the stress hormone, relieve anxiety, and improve mood.

Because of its properties, Rhodiola rosea can be helpful in treating mild to moderate depressive conditions. It has been shown that in such cases it is almost as effective as synthetic drugs, namely it alleviates depression without causing side effects unavoidable with synthetics and without burdening the body.

How to use the Arctic root?

Rhodiola rosea is widely available in the form of capsules, also vegan, extract, and finally powder, which consists of the crushed root of the plant. You can also make your own tincture from the crushed rhizome by pouring spirit over it and letting it stand for 2 weeks.

Rhodiola should be taken in the morning or before intense mental or physical exertion, while taking it before bedtime can sometimes cause sleep difficulties due to its stimulating properties.

Although Rhodiola has not been found to cause dangerous side effects, it is important to exercise moderation and caution when using it, and if taking antidepressants, it is essential to consult a doctor about taking the herb extract.