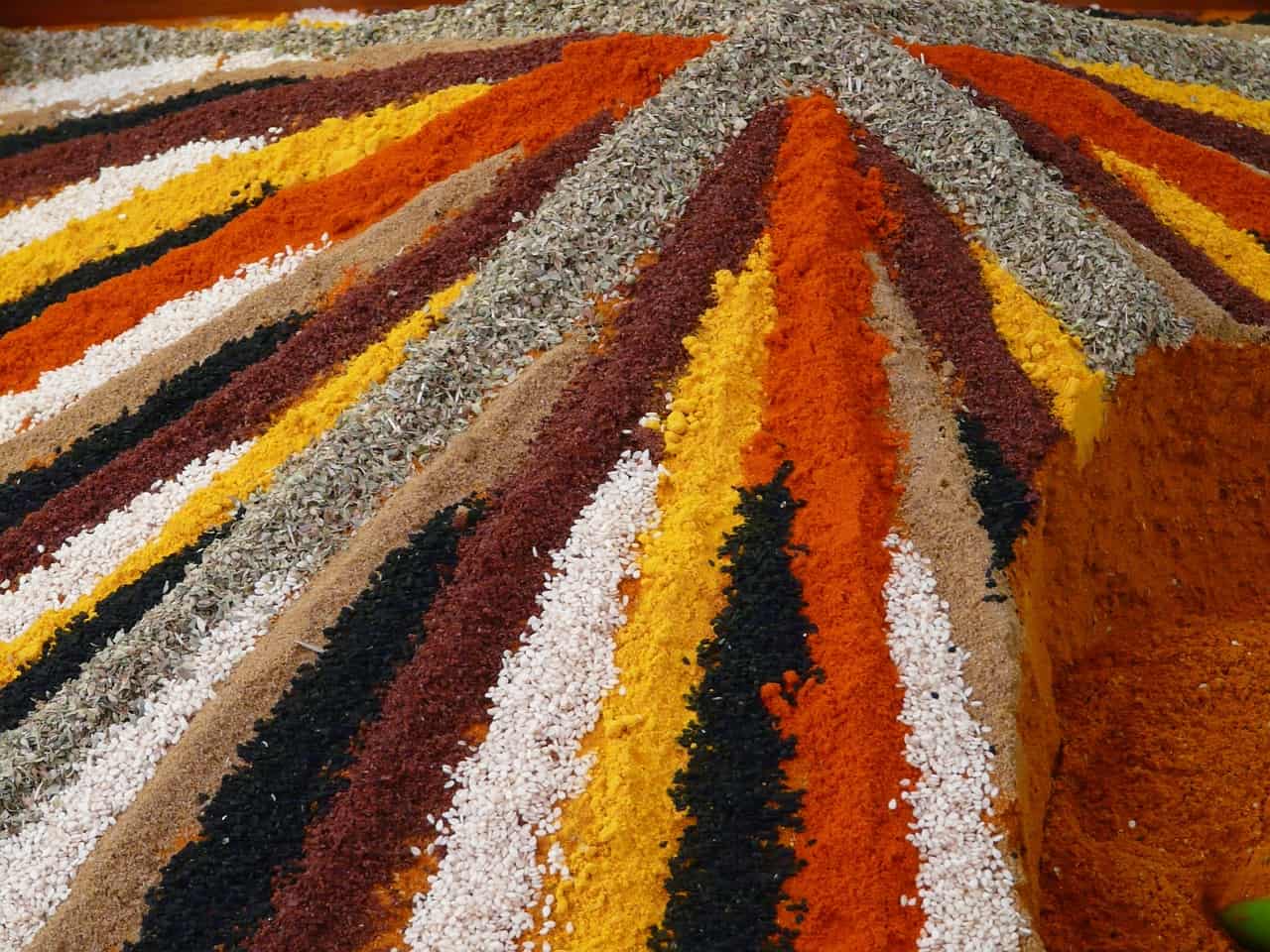 Thermogenics provide valuable support at every stage of weight loss. Their key feature is mobilising the body to burn calories more intensively and reduce fat tissue more efficiently. Thermogenics are widely available, we can find them not only in the form of fat burners in capsules, but also in a whole range of food products, whose potential is undoubtedly worth using. The best results will be achieved by combining a diet rich in products with thermogenic properties with supplements with such properties. If we add to this a bit of physical activity, unwanted kilograms will quickly disappear from our silhouette. Find out how thermogenics work and how to make the most of them!

Thermogenics are all substances of both natural and synthetic origin, which when introduced into the body result in increased production of heat energy and thus in high calorie expenditure. The mechanism of thermogenics action is related to the physiological phenomenon of thermogenesis taking place in our organism.

In physiology, thermogenesis is defined as all the processes occurring in the body, which result in heat production in order to maintain a constant body temperature. There are several types of thermogenesis such as:

Postprandial and post-exercise thermogenesis are commonly used to accelerate the fat burning process. Both phenomena can be an effective way to double your caloric expenditure and increase the share of lipid tissue in energy production, and thus more efficient weight loss.

Thebest results can be achieved by triggering post-prandial and post-workout thermogenesis simultaneously – by using thermogenic fat burners and food thermogenics, as well as by physical activity which mobilises muscles for intensive work. In this way we are also able to burn the so-called resistant fat which is extremely difficult to reduce (e.g. from the abdomen, thighs, arms, hips).

Among substances with thermogenic properties, there are natural ones – derived from plants – and synthetic ones – created from artificial substances by chemical processes. Both types of thermogenics have the same mechanism of action – they increase body temperature, speed up metabolism, increase calorific expenditure and intensify the breakdown of fat tissue. However, natural thermogenics are definitely safer for our health. Artificial ones act more rapidly and may cause abnormalities in the functioning of the system.

Synthetic thermogenics – effective in fat reduction but dangerous to health

Synthetic thermogenics, although they have high potential in the field of fat tissue reduction, are mostly illegal substances. They cause side effects that are dangerous to your health, so in many cases they have no place in the official market.

It is better not to use such substances because, firstly, we expose ourselves to a number of health problems, including the destruction of the cardiovascular and nervous systems, and secondly, we never know for sure what really “sits” inside such pills coming from the black market or from an anonymous, unknown brand. Popular synthetic thermogenics include:

Unfortunately all of these substances are dangerous for us and carry a whole range of side effects. They affect the body in a very intensive way, artificially increasing metabolic processes, causing disorders of important systems and organs (such as the brain or the heart), and carrying a high risk of damage or failure.

Importantly, synthetics like dinitrofenol are downright lethal. DNP is a highly toxic substance used in the production of weedkillers, among other things. It causes a drastic increase in metabolism and leads to “cooking” of the body from the inside. There are cases of deaths after taking DNP, so it is better to avoid this chemical compound by a wide bend.

You should also avoid strong stimulants such as the mentioned ephedrine, sibutramine, fentermina, clenbuterol or amphetamine. Although they accelerate fat burning, they also have a very important disadvantage, namely they burden the heart, cause an increase in blood pressure, interfere with neurological functions and increase the risk of heart attacks and strokes. In many people, these substances cause adverse reactions such as:

Most commercially available fat reducers are based on natural thermogenic substances derived from selected plant materials. Citrus fruit, green tea, garlic, coffee and spices with a strong, often spicy flavour all have thermogenic properties. Let’s take a look at the most commonly used in fat burners and the most effective natural thermogenics. Here they are:

Capsaicin is probably the most popular natural thermogenic, massively used in body building supplements. It is extracted from hot chili peppers, which are also found in powdered form under the name cayenne pepper. Capsaicin contributes to energy expenditure and fat burning by increasing body heat. The substance also promotes weight loss by suppressing appetite and improving digestion.

What is more, capsaicin is a strong antioxidant which has a very positive effect on our health. Among other things, it stimulates the cleansing of the body from toxins, protects cells from degeneration and aging, shows anti-cancer properties.

Another natural thermogenic derived from the popular hot spice, this time from black pepper. Piperine has a thermogenic effect, increases metabolism, stimulates calorie burning and the breakdown of fat tissue, thus accelerating the process of weight loss. It also has an effect on digestion. It increases the secretion of gastric, pancreatic and intestinal juice, improves digestive processes, regulates the bowel movement cycle, prevents digestive system ailments, and improves the absorption of valuable nutrients from food.

Curcumin is a valuable substance contained in the popular Asian spice – turmeric (also known as long spurge). It has a thermogenic and metabolism-boosting effect, but that’s not the end of its slimming properties.

It regulates blood sugar levels, preventing hunger attacks and stimulates the breakdown of fats from food, preventing their storage. In addition, it improves the work of the digestive system, improves digestion, protects against flatulence and indigestion, supports liver function. Turmeric also has a number of health-promoting properties, including anti-inflammatory, antioxidant, detoxifying, antibacterial and antiviral.

The gingerol, zingiberol, zinferon, and shogaol contained in ginger are powerful thermogenic substances that will effectively kick-start your metabolic rate, increase your body’s calorie consumption, and boost the burning of stored fat.

What is important for persons losing weight, ginger, similarly to other natural thermogenics, improves digestive processes, has a diastolic effect, facilitates defecation, frees us from bloating and other ailments of the digestive tract, which contributes to reduction of the stomach circumference. Ginger also supports our health by, among other things, preventing oxidative stress in cells, reducing inflammation, fighting infections and colds, reducing joint ailments.

Green tea is rich in catechins (EGCG) and natural caffeine, thanks to which it has thermogenic properties, accelerates the metabolism, improves the metabolism of carbohydrates and fats, prevents the accumulation of dietary lipids and stimulates the burning of stored fat tissue.

It is impossible to deny this aromatic spice numerous slimming properties. Firstly, cinnamon is a thermogenics, so it intensifies metabolism and stimulates fat burning (it gives especially good effects in combination with other substances with thermogenic effect, such as caffeine or curcumin).

Secondly, cinnamon is a specialist in regulating carbohydrate metabolism in the body – it normalises the level of glucose in blood, has a positive effect on the work of the pancreas and regulates the secretion of insulin, which reduces appetite and prevents hunger attacks and eating excessive portions of food. Thirdly, it supports digestive processes, eliminates stomach ailments, flatulence, indigestion. Fourthly, it stimulates the removal of harmful substances from the body. Fifthly, it reduces the appetite for sweets.

Synephrine is a bitter orange extract that is considered a safe substitute for ephedrine due to its strong weight loss properties, yet natural origin and milder effects on the body. Synephrine exhibits strong thermogenic properties, which translates to high caloric expenditure and activation of spare fat breakdown.

This substance works great as a pre-workout support. Not only does it increase fat burning during activity, but it also reduces fatigue, boosts energy and increases physical performance, making it easier to implement training plans. What’s more, synephrine helps with diet control, as it effectively suppresses the appetite and prevents calorie excess.

Guarana is a plant originating from Brazil and is one of the best sources of natural caffeine. It works in a similar way to coffee, but the effects are stronger and last longer, which is undoubtedly good news for people who are looking for an additional source of energy and an effective method of fighting psychophysical fatigue and lack of desire to be active.

When using supplements with guarana, you can count on stimulation and increased motivation, which will make it easier for you to achieve your training goals. The surge of energy generated by guarana and the natural caffeine it contains goes hand in hand with suppressing the appetite and with a thermogenic effect which increases metabolic processes and reduces fat.

Forskolin is the active ingredient in Indian nettle with a wide range of health benefits. It is also characterized by numerous slimming properties, thanks to which it finds its place in many weight reducers. Forskolin increases thermogenesis, accelerates calorie burning, stimulates fat metabolism and supports lipolysis, stimulating reduction of accumulated spare fat.

It also has a positive effect on digestion, supports the pancreas and prevents blood sugar fluctuations. What is important, forskolin improves the work of the thyroid gland, thanks to which it facilitates weight loss in cases where weight gain was related to malfunctioning of the thyroid gland.

Thermogenics in food – what to eat to increase thermogenesis?

Thanks to a properly composed diet, it is possible to intensify thermogenesis, to turn up the metabolism and to stimulate the body to use fat reserves more often in order to obtain appropriate doses of energy. As already mentioned, certain types of food have a better thermogenic effect, others a worse one.

Proteins increase thermogenesis the most, carbohydrates come second (first complex carbohydrates such as dietary fibre, then simple carbohydrates) and fats come third. The basis of our daily menu should therefore be products with a high content of protein and fibre, while simple sugars and fats should be limited.

The best thermogenics in food are: