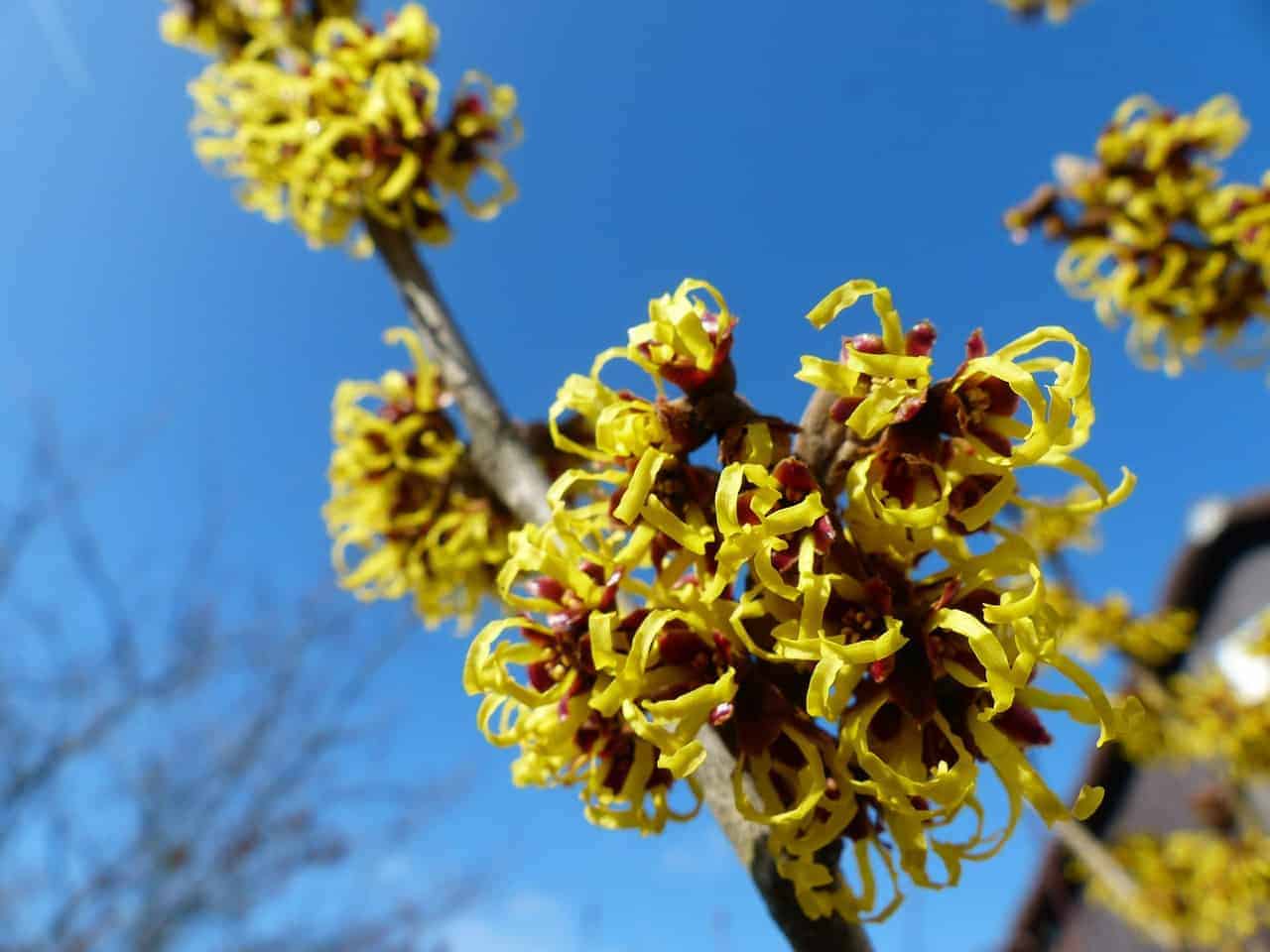 Witch hazel, perhaps not as famous as other plants used in natural medicine, is an herb so invaluable to health that it has been called “Indian gold”. Suffice it to say that its many properties and uses include a beneficial effect on the skin, supporting the circulatory system and strengthening blood vessels, anti-inflammatory and antiseptic effects, anti-hemorrhagic and antioxidant.

A picturesque shrub with magical properties

Witch hazel occurs naturally in North America, where its health-promoting properties were discovered by Native American Indians. The plant grows up to three or four meters tall and is characterized by large leaves and exceptionally attractive yellow flowers. For these reasons, the shrub has gained recognition in many countries around the world, including Poland, as an exceptionally decorative plant. Meanwhile, in addition to aesthetic values, witch hazel has, which not everyone knows, specific medicinal attributes, among which we can list for example skin irritation and burns alleviation, reducing the visibility of spider veins and varicose veins, analgesic action and elimination of swelling.

For medicinal purposes, mainly the leaves and bark are used, which are dried after being obtained. The health-promoting value of the plant is the result of its exceptionally valuable contents. Witch hazel contains flavonoids, saponins, tannins, gallic acid and ellagic acid. These important active substances cause witch hazel to exhibit antibacterial and antiviral, anti-inflammatory and analgesic, antiseptic and purifying activity.

Witch hazel’s multiple effects mean that it can be found in ointments for frostbite, as well as burns, bruises, ulcers and insect stings. It is used in the treatment of hemorrhoids and varicose veins, painful joints, muscles and spine, in case of diarrhea and other digestive system disorders, all kinds of swelling and bruises, as well as mouth irritation. Witch hazel is also an ingredient of numerous skin care cosmetics, because it perfectly deals with seborrhea and acne, blemishes and all kinds of lesions, and also perfectly rejuvenates the skin.

The effectiveness of witch hazel in this area is associated primarily with its positive effect on blood circulation and the condition of blood vessels. It strengthens and seals capillaries, regulates subcutaneous circulation, has astringent, anti-hemorrhagic and anti-inflammatory effects. By improving circulation, it minimizes the appearance of and combats spider veins on the legs and swelling, reduces the feeling of heavy legs, increases skin firmness and elasticity. At the same time it has a protective function – prevents further dilatation of blood vessels.

In cases of circulatory insufficiency of the lower limbs witch hazel can be applied both externally and internally. Compresses soaked in witch hazel extract should be applied to varicose or spider veins twice a day for two months. Additionally, you can help yourself to a tea made of dried leaves. Pour a glass of boiling water over two teaspoons of dried leaves and put it aside under a lid for 10 minutes. Drink one such portion a day.

When fighting varicose veins, it is also worth reaching for multi-ingredient dietary supplements containing, apart from witch hazel extract, horse chestnut extract, widely known for its effectiveness. One such product is Varicorin, a preparation valued by patients, which significantly improves circulation and the condition of veins.

Hemorrhoids, i.e. varicose veins of the anus, are, unfortunately, a frequent and extremely annoying ailment. Both the leaves and the bark of witch hazel are used in their treatment. These parts of the plant are rich in anti-inflammatory substances such as anthocyanidins, flavonoids, tannins and saponins. They regulate subcutaneous circulation, inhibit inflammation, tighten skin causing varicose veins to shrink, seal wounds and soothe irritation. That is why applying ointments, gels or compresses containing witch hazel extract to the affected areas brings considerable relief and minimizes the symptoms of the disease.

It is also possible to use so called buckets of water or rinses of pathologically changed places with the use of dried witch hazel infusion. Such baths support the treatment and alleviate the symptoms, moreover they ensure proper pH level in the rectal area, which is also important in fighting hemorrhoids. They should be performed twice a day for 15 minutes.

It was mentioned earlier that one of the most important assets of this plant is definitely beneficial effects on the skin, both in relation to minor problems, such as bruises under the eyes, and serious dermatological conditions, such as acne.

When it comes to minor skin problems, witch hazel extract works like the best tonic – it cleanses and moisturizes the skin, soothes irritation and has astringent properties. It eliminates any swelling, including around the sensitive eye area, making bruising less visible. It is effective in removing various irritations, such as those caused after shaving.

Hamamelis virginiana also perfectly deals with chronic inflammatory conditions of the skin. It fights acne, eczema and psoriasis and is effective in treating blemishes, scars and spots. Because it regulates sebaceous glands by reducing the production of sebum, it is useful in the treatment of seborrhea and acne, as it reduces the number of blemishes and limits the formation of new ones. It also helps temporarily in cases of bruises, burns or insect bites, soothing the ailments and reducing symptoms.

The above mentioned beneficial properties for the skin could not fail to interest representatives of the cosmetic industry. Thanks to its positive effects on skin, hair, blood vessels, wrinkles, skin firmness and elasticity, as well as its antibacterial, anti-inflammatory, cleansing and antiseptic properties, witch hazel has become a component of many creams, gels and tonics. It works especially well in the care of skin with dilated capillaries, prone to irritation and acne. By cleansing the skin, it soothes irritation, eliminates inflammation, removes excess sebum without drying it out as it has moisturizing properties.

It has a similar effect on hair, nourishing and moisturizing it, giving it shine and preventing hair loss. At the same time, by regulating the work of sebaceous glands, it minimizes the symptoms of dandruff. It is also worth noting that due to the presence of antioxidants, witch hazel protects against free radicals and allows you to stay young longer.